Wow but the City Section’s Marine League is going to be such good watchin’ this winter. Tonight Carson and Narbonne – both up-and-coming teams that are part of that league – battled it out hard for 50 minutes, scrapping, gunning and twisting before Narbonne eeked it out by a literal last-second bucket.

The teams were neck and neck throughout the first half, trading two-point leads and seeing more ties than the law should allow. It reminded me of the Dec. 12, 2008 Washington Prep-Taft game that I blogged about here, in that no plays were being run most of the time. Whenever the defense of whichever team wrenched away the rebound, whatever player got it would then go thundering up the court, her teammates right with her, for the fast break. And wow, were the girls from both teams fast. They’ve all obviously been doing their speed training. Not to mention the speed of the spin moves and pivots. I had to fan myself a couple times.

In the second half Narbonne went on a mini-run, and thanks to a couple of three-shots from junior Tailer Butler, they found themselves up by six with less than nine minutes to go. But the Colts clawed back, and the last six minutes of the game was a neck and neck affair again. Tied at 40, the Gauchos inbounded the ball on their end with two seconds to go, and sophomore guard Nailah Long let a shot fly from the left corner. It swished through at the sound of the buzzer. 43-40! What a great game.

The Marine League is a conference that runs roughly from the 110 and 105 freeways down south along the 110 to the water. From the mid-90s, when James Anderson took over, to 2008, Narbonne dominated the league. No one even came close to challenging Narbonne’s dominance until 2008, when Washington Prep beat them in a regular season game on Feb. 6. ‘Bonne had to share the league title for the first time in 12 years. Since Anderson had already been let go by the school the year before, the 2008 group marked the end of an era of “his girls,” and last year Narbonne struggled for many of their wins as the new coach sought to rebuild the program.

In the meantime, Carson has been growing stronger every year under the leadership of Coach W. Marcel Sanders. I can’t help but root for them at times, because it seems they’re always the bridesmaids and never the brides. I think their time is coming, though. Their hunger on the court was palpable tonight, seen in the narrowed eyes of the sprinting girls on the floor.

Also challenging for the league title this year will be Prep, who went undefeated in league last year to take it. They’ve lost two key players coming into this year, and some are projecting they’ll be weak. But that’s what critics said after their 2008 season, when they graduated eight seniors, and they still went to the first round of state playoffs last year as they had the year before.

So we’ll see, and it should be fun. I’m excited that there’s finally a City Section league that isn’t dominated by one team. Let the runnin’ and gunnin’ begin. 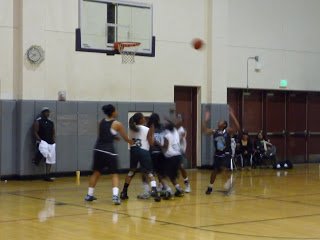 The Carson player on the far right (dark uniforms) is about the get the rebound. 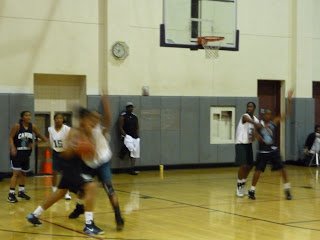 Junior Center Janitha Iamaleava (the blurred one on the left) had the ball in the first half. In fact, I gave up after a while because the players were all moving too fast to capture a good image. 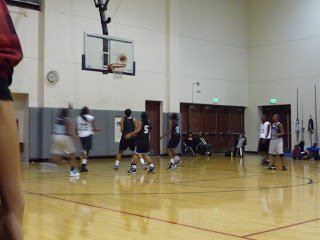 In the second half, Narbonne stepped it up about a half a step above Carson for a bit, and went on a mini-run. 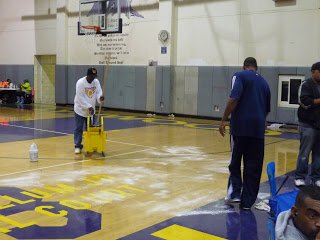 Lynwood Coach Ellis Barfield (dark Adidas outfit) and one of his assistant coaches attempt to clean up the baby oiled floor this evening. Apparently one of the players on a team (the court behind me) spilled it, and when they couldn’t successfully clean it up within 10 minutes, league director Art Jackson cancelled the rest of the game.