Poly always brings three teams to the league, but mixes varsity and JV players liberally. So opponents never play the same Poly team twice. Lynwood, according to Coach Ellis Barfield, is traditionally a “speed team.” So the Knights and Jackrabbits match up well.

It was a fast and physical game, and Lynwood lead by 2-4 points for most of both halves. At the end of the second half Poly came within one, and then tied the score at 38 with less than a minute to play. Lynwood missed a shot, as did Poly, but then the Knights hit to put them up by 2. Poly failed to make a layup with two seconds to go, and the final score was 40-38.

I’ll probably have to do profiles of each of these teams before the season starts. 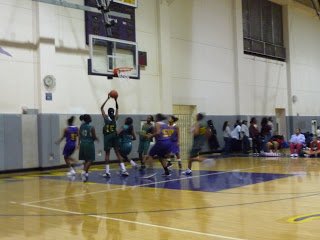 A Poly player gets the rebound in the second half. 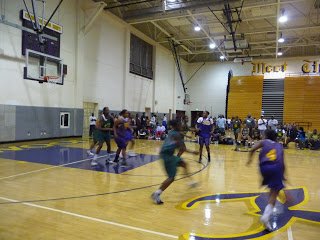 Lynwood’s Tyonna Outland (#4) pounds the ball around the top of the key.