“You’re only in high school once,” a girl’s basketball coach said to me recently as he settled in to watch her play for the school’s volleyball team – her side gig.

Numerous good basketball players also like to hit the white ball during the fall season, where they can still put all that jump training to work. They know they’ll have to give it up in their senior year, so they have fun doing it while they can.

One of those kids is Reshanda “Too Tall” Gray, a junior (basketball) center at Washington Prep High School. I caught one of Prep’s volleyball games last week, and Too Tall was ballin’ just as much as she does with the orange ball. Her at-the-net blocks were almost as hot as her kills: when she jumps up in the air, her feet go out in a Jordan-like splay. Gwan, girl. 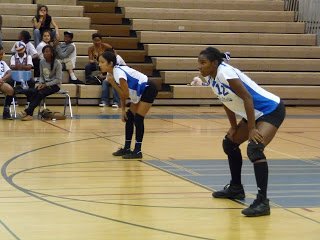 Reshanda “Too Tall” Gray, right, is ready for the serve. 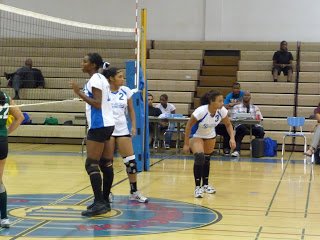 She does a killer (pun intended) job at the net, too.