The Mercury came out blazing and hitting threes immediately. The Sparks never made the adjustment, as Phoenix players continued to be left open throughout the game to seemingly take shots at will. Their game percentage for trey-shots was 46.7 percent.

Another aspect of the Mercury’s game that LA failed to stop was the fast-break offense. It seemed the Sparks would work so hard for every basket, only to see Phoenix just slip it in on the other end.

The rivalry between these two teams heats up more and more everytime they play. Sparks fans boo the players all over the place – especially Diana Taurasi. I sense that their dislike of DT now outweighs their dislike of Lauren Jackson; it’s that bad. And this is in a year when, following her drunk driving arrest in June, that Taurasi has been uncharacteristically quiet. If this were a regular year where she is jawing non-stop in every game, I think Sparks fans would be booing her every step.

Candace Parker and Taurasi matched each other point for point. CP had the double-double, with 10 rebounds.

Sparks Coach Michael Cooper says the team will win the next two in Phoenix. Sounds like the Sparks themselves aren’t so sure.

Even if LA loses tomorrow night, or Sunday, I give them props for putting it together and making the Western Conference finals. I wasn’t sure they were going to get there for a while. 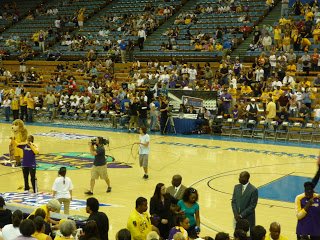 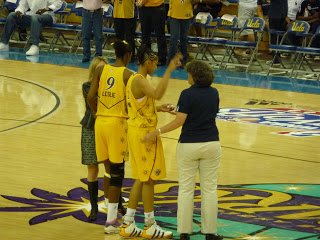 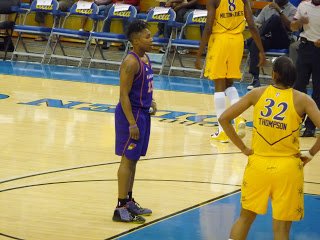 Cappie Pondexter has shaved the right side of her head, but the left side and top still have hair. Thus, it’s not quite a frohawk – all the rage among teens and college students these days. So what is it? What do you call that hairstyle, which I’ve never seen before? 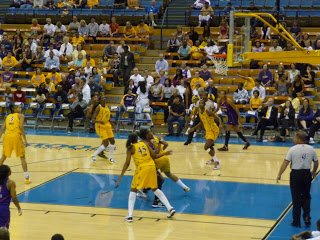 The almost-frohawked one throws up a shot in the first quarter, which missed. 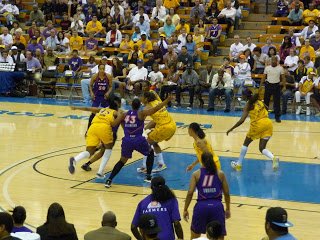 It’s probably the fiercest rivalry in the WNBA, these two teams. Very physical last night, including this scramble for the ball in the second quarter. 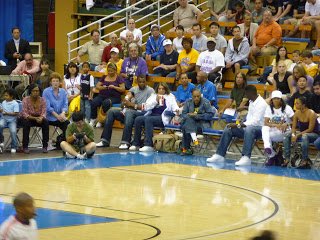 Shelden Williams, with Lailaa, and Sarah Parker, take in the game. 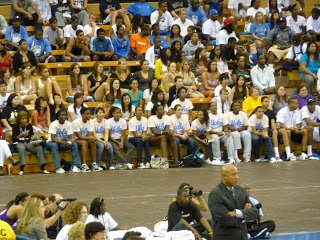 The entire UCLA basketball team was there last night, and wow did they have fun. They performed at timeouts (Darxia Morris won a dance-off), they threw T-shirts to the crowd, and were laughing a lot. Can’t wait to see them play in a month and a half. 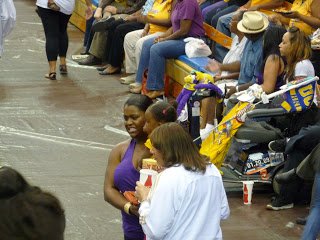 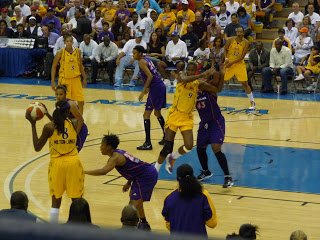 Delisha Milton-Jones tries to get the ball inside in the third quarter. 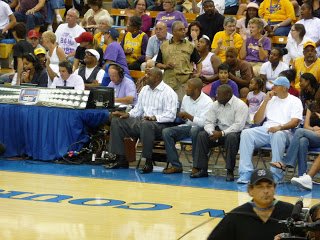 Magic Johnson was in the house. 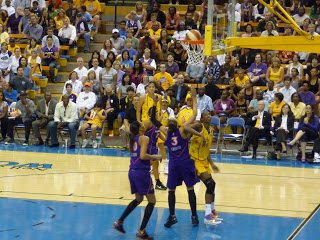 Mad scramble for the ball in the fourth quarter.