I don’t enjoy when these two teams play one another – especially in the playoffs. When I have my old home team and my new home team vying in “win or die” time, it’s not fun.

The Sparks played very cohesively in the first half, like the team fans thought they were going to get at the beginning of the year. The Storm seemed out of sorts and off-balance, which is to be expected since they’re missing Lauren Jackson for the second post-season in a row, and Katie Geralds.

The Storm battled back in the third quarter, which is always the Sparks’ worst. Big ups to Swin Cash, who put the team on her back, and Suzy Batkovic-Brown, who couldn’t seem to miss. The fact that LA only beat them by seven when Seattle is missing so much horsepower is not a good sign for the Sparks.

Daryl Humphrey, June Courteau and Tony Dawkins take the term “crappy refs” to a whole other level, making phantom calls and calling a foul on the wrong player, on both ends of the court. I haven’t seen officiating that bad in a long, long while.

Next game is 7 p.m. tomorrow in Seattle. 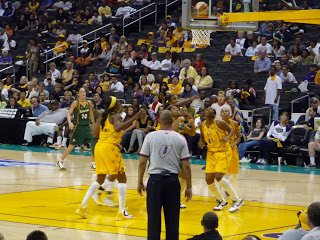 The Sparks actually box out when Swin Cash throws up a shot, in the first quarter. Referee Daryl Humphrey, #8, is one of the worst in the league. 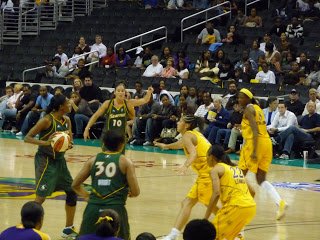 Sue Bird, ever the PG, tells Cash what to do next. 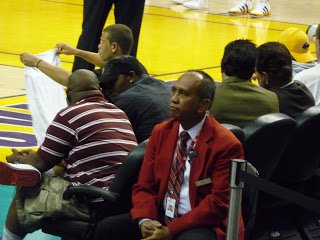 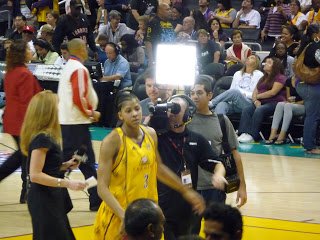 Candace Parker walks away from the “beginning of halftime” interview. They got her after the game, too. 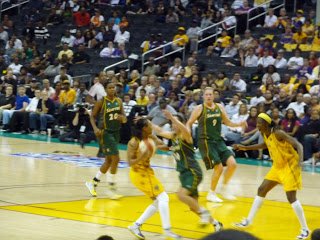 Bird guards the hell out of Betty Lennox in the third quarter. 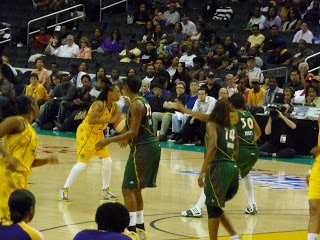 Lennox takes a turn at PG…… 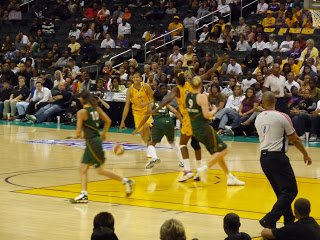 …….as does Parker a little later. 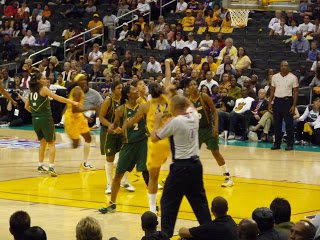 Tina Thompson threw up this ridiculous side, off-balance shot in the fourth, with 4:52 to go. As she fell out of bounds it swished in to put the Sparks ahead 64-54, and the crowd went wild. The above shot is just as she released the ball. 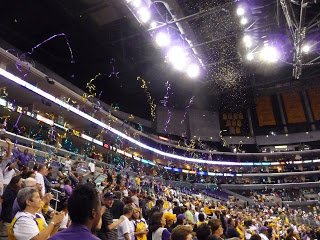 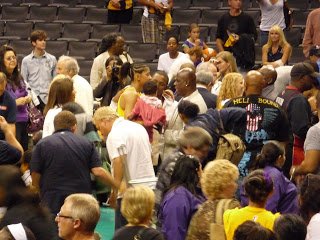 After the game, Parker and baby Lailaa chat with some tall dudes.