At the end of a season full of glitches, last night came off without a hitch.

The Sparks soared into the WNBA playoffs with a solid third-seed after thrashing the Minnesota Lynx. And they did so amidst an evening of honoring Lisa Leslie, which included a pre-game tribute that brought out family, friends and celebrities.

After the National Anthem, longtime Sparks play-by-play guy Larry Burnett guided the ceremony. Leslie’s former coach at Morningside High School gave her a hug, as did the USC basketball team and all of her current Sparks teammates. Leslie’s family spoke, and then surprise guest Earvin “Magic” Johnson strode out. Among the many nice things he said, the best was when he recounted being asked in the airport earlier why he wasn’t at the Basketball Hall of Fame ceremony honoring his friends.

“I told them, ‘I’m in LA honoring someone who will be in the Hall of Fame,'” he said.

There were also several video tributes throughout the rest of the evening, including one from Lynx Coach Jennifer Gillom.

The Sparks got off to a quick start in the first quarter, and built a nice lead going into the second. But Minnesota went on a 15-2 run, and the Sparks were stuck on 30 points forever until the evening’s honoree hit a bucket. From there, the Sparks seemed to take control again, growing the lead into the second half and bringing the victory home.

The Sparks will take on second-seed Seattle at Staples Center Wednesday, Sept. 16.

After the game, season ticket holders headed across the street to the party at ESPN Zone. It was a huge turnout; I’m not the best at crowd estimation, but there had to be 400-500 people there.

Co-owner Kathy Goodman, Coach Michael Cooper and GM Penny Toler each thanked the crowd for coming, and then Burnett took over and interviewed players as they walked in.

Vanessa Hayden’s two-year-old daughter was with her, as was Tina Thompson’s five-year-old son. Good lord but the children of basketball players are tall for their ages. Each child looked older then they are. Ditto for Leslie’s fast-growing toddler.

Cool giveaway of the night: the first grip of fans that came in got a T-shirt that read “pass the ball to the girl” on the front, with Leslie’s number 9 on the back. Ya gotta love that slogan. 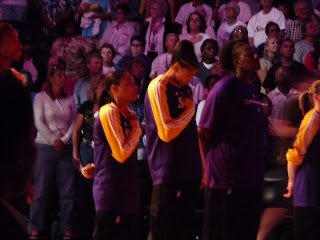 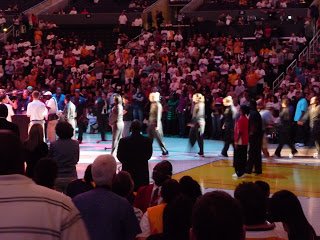 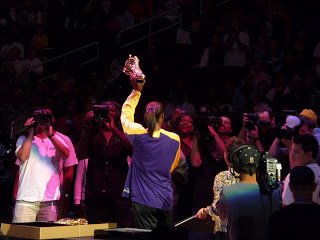 Lisa Leslie holds up one of the gold-dipped shoes she was presented. 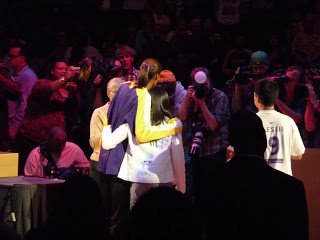 Leslie’s longtime friend, the legendary Dawn Staley, was on hand for the ceremony. 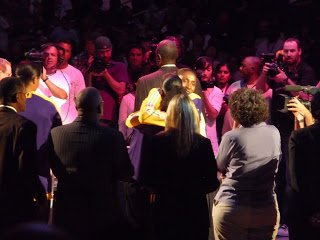 Leslie hugs all of her teammates, including Noelle Quinn. 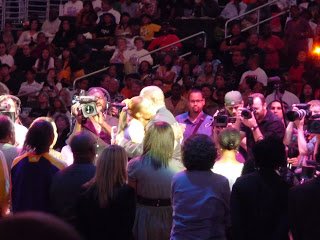 Earvin “Magic” Johnson and Leslie hug after his words about her. 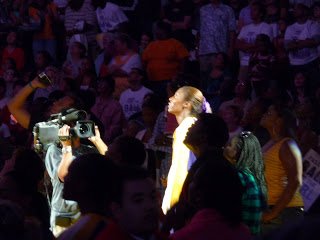 Leslie and the crowd pause to watch a video tribute to her. 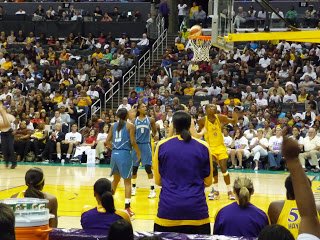 The second quarter saw Minnesota go on a 15-2 run until under four minutes to play, when Leslie finally put up 2. 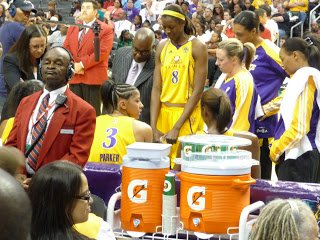 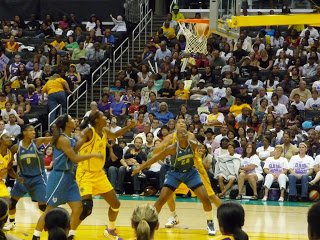 The Lynx on offense in the fourth quarter. I dislike when teams mix it up and put themselves in front of the opponent’s basket on offense for the second half. 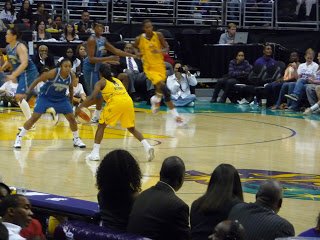 Shannon Bobbitt vs. Rene Montgomery, but check out Leslie streaking up the right side. Not bad for 37, I have to admit. 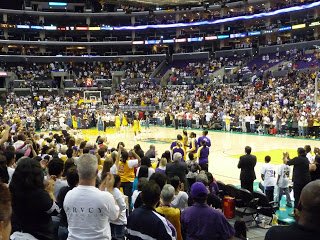 The house, completely packed, stood and applauded when Leslie came out of the game for the last time. 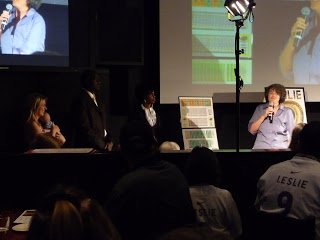 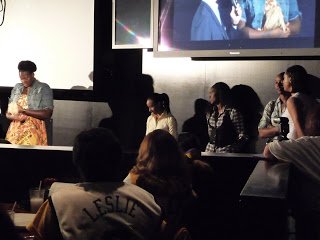 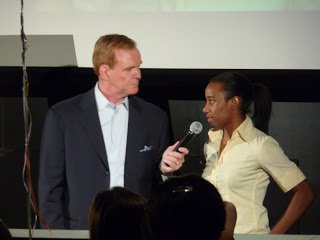 Larry Burnett interviews Bobbitt, who received a very warm welcome from the crowd when introduced. 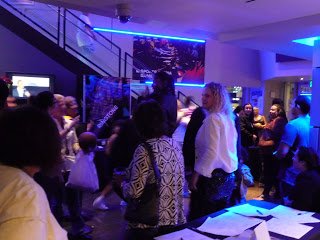 Leslie dipped into the party for about a minute (literally), then left with apologies: “I’m sorry, you guys – I’m exhausted.”