Lisa Leslie had a ridiculous game, and in the process, lifted the Sparks to the win over Minnesota. She went an incredible 13-15, and was hitting shots from everywhere on the floor. She’s had some big-scoring games lately, and frankly, I’m glad to see it. If you’re going to retire, go out the way your fans remember you. Too bad Yo Griffith and Sheryl Swoopes couldn’t do the same.

It was an exciting game because the Sparks were doing everything right: defending, rebounding, shooting. More importantly, they were taking the ball to the rack! Some really slick plays in the process – pure Hollywood – that got the crowd screaming and on its feet. Now that’s more like it! It’s the team I remember from last year (most of the time).

I feel sad for the Lynx, who I like. They were held in check tonight despite the efforts of Candice Wiggins, with 13 points. I can’t help but wonder how they’d be doing if Seimone Augustus hadn’t been injured.

So the battle for third and fourth place continues, as LA travels to San Antonio Friday. It’s goin down! 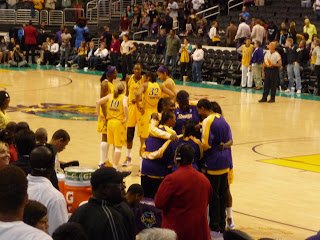 There are two huddles before tipoff: the starters and the non-starters. 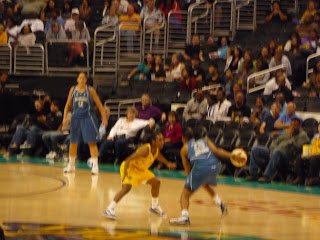 I wish this picture had come out better, because it was fun to see Shannon Bobbitt and Renee Montgomery square off again. 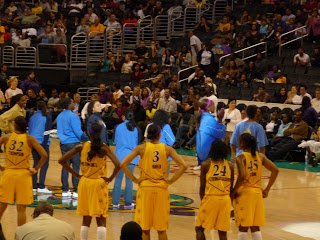 It was “UCLA Night,” which meant both the female and male Bruin mascot were wandering around with Sparky during the first half. It also meant the Bruin team was recognized at a timeout (above). Very cool. 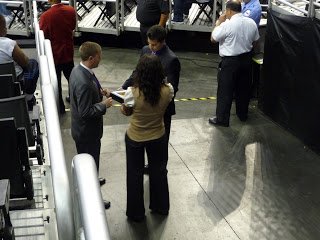 Another reason it was UCLA night is that Coach Nikki Caldwell (above) was honored at halftime as an Inspirational Woman. Excellent choice. 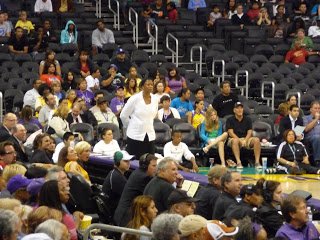 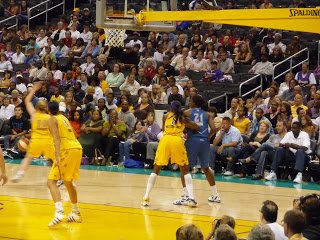 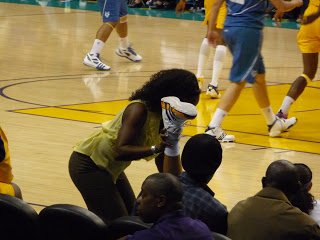 That’s Candace Parker’s foot. She needed a stretch toward the end of the second quarter. 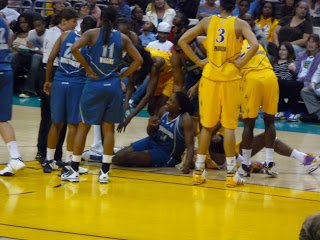 A grip of players, including Anosike and Leslie (above), were wrestling for the ball in the fourth quarter, and it took the refs forever to blow the whistle. I’m convinced they did it on purpose to see what would happen. 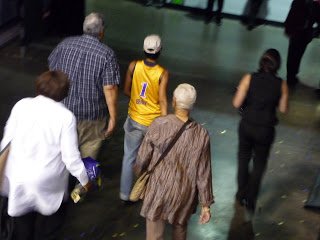 This is Halle Berry’s back (doncha love the “Berry 1”?). Because as she was walking through the tunnel right below me, I was standing there staring for a minute before I remembered I should be taking pictures. She’s shorter than I thought she would be.