The Sparks won at home!

Candace Parker gave Marie Ferdinand-Harris credit for her nine points in the final eight minutes. The authors of this recap also gave the credit to CP, who had yet another double-double. Lisa Leslie added a whoppin’ 20 points. But I’d like to give credit to the entire Sparks team, which looked more like a team tonight than they have at points this season.

They were playing better defense, and were actually taking the ball to the hole instead of standing outside the perimeter jacking up shots. There was in-the-paint play! I was delighted.

The one thing I didn’t like, though, was the intense physical play that the Mystics brought. They were taking it too far with the shoving and the pushing. I haven’t seen the Sparks players hit the floor as many times in all the home games of the season than I did tonight. Washington’s Chastity Melvin was T’ed up in the third quarter when she took her hand off the ball to push away the hand of Leslie, who was defending her. Nakia Sanford fouled out of the game in the fourth quarter, and the crowd was so happy they stood up to wave. Matee Avajon also fouled out, thankfully.

The irritation built up until the third quarter, when Leslie was going to the basket. She charged into (I think) Melvin and left her sprawling, then walked away. It was one of those things where there was just enough doubt that the refs didn’t call it, but those of us who’d been watching the entire WWF match until then had a feeling Leslie probably did it on purpose. We giggled.

In the fourth quarter Leslie and Sanford tangled under the basket and Sanford landed on her butt as the whistle sounded. Leslie looked down at her, giving her the classic stare, and walked off. In the past, Leslie has been one of those physical players, and I didn’t like her for it. But tonight I couldn’t even be mad at her for pushing back at the Mystics; I would have done it too. And I even laughed when she did it.

Credit to the Mystics goes to Avajon, who came off the bench to lead her team in scoring, with 20. Lindsey Harding added 19.

Noelle Quinn continues to impress. The Sparks have a big gem in her.

Tina Thompson continues to slump. Hope she pulls out soon.

Tomorrow, Minnesota. I’m looking forward to seeing them in person. 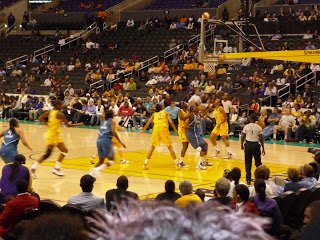 First half play had the Mystics trying to score in front of the Sparks bench. 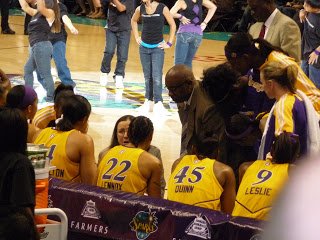 This is how timeouts have been looking lately: Assistant Coach Marianne Stanley talks to the team first…… 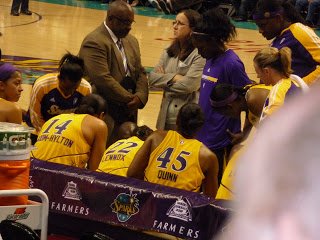 …….and then steps aside while Cooper has a turn. 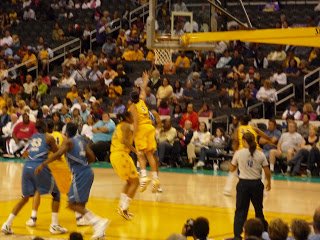 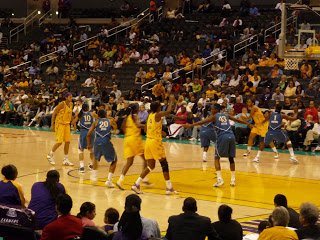 In the third quarter, Tina Thompson (far right) swings a pass to the top of the key. 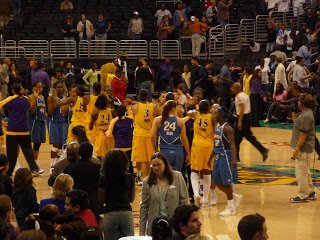 The handshake line was very civil in light of the way the teams had just played against one another. 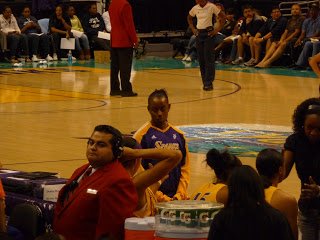 Givin’ my Lady Vols a bad time I: Shannon Bobbitt makes a muppet face during a timeout. 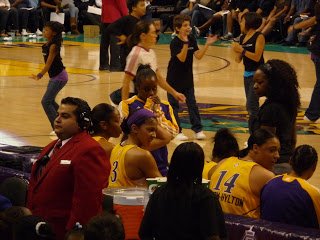 Givin’ my Lady Vols a bad time II: A few seconds later, Candace sees something she doesn’t like (I couldn’t tell what it was).