I figured out what’s wrong.

Don’t ask me how I found out, but the problem with the Sparks this year is that they can’t all get on the same page. There are too many chiefs and not enough lieutenants. All those vets are used to playing their way, and are having trouble breaking out of two decades of those ways and habits to play with a team.

It’s a valuable – albeit sad – lesson of team sports: you can have all the talent in the world, but if you can’t put it together, you won’t be much good for each other.

I’m not convinced it’s all Coach Michael Cooper’s fault. I’ve seen coaches whose players can’t or won’t execute what they tell them to. I’ve come across other coaches who were very knowledgeable but had zero ability to motivate their team. Things happen.

But it’s just sad, because it seems like such a waste and a lost opportunity.

Highlight of the night for me: watching CP stand with the ball at the top of the key on one play. When the defender lunged toward her, CP put the ball behind her back – by palming it. Then she swung her arm back and forth twice, ball still in hand. 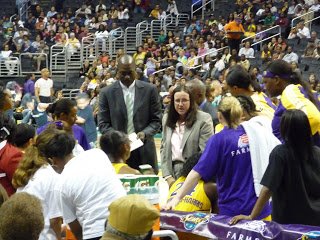 Someone (who obviously doesn’t understand Lisa Leslie very well) on the rebkell board suggested LL would be the Sparks’ new head coach next year. Someone else said Assistant Coach Marianne Stanley was being groomed for the job. If you saw their timeouts, where Stanley often does most of the talking (above), it would seem like that. But I was told three weeks ago that considerations for a new coach haven’t begun yet. So we’ll see. 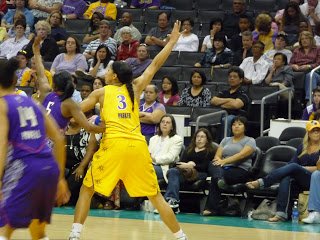 Candace Parker was trying so hard tonight. She out-rebounded everyone on both teams, and took care of a lot of little things for the Sparks, who seemed like slugs compared to her. Parker, who had a baby three months and one day ago, also played more minutes than anyone on either team. 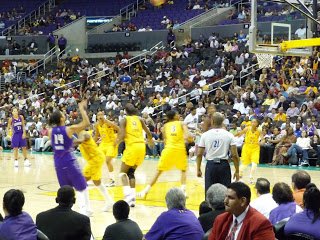 Nicole Powell unleashes yet another bucket for two of her 18 points on the night. The Sparks didn’t seem to make any adjustments to her when she began the game strongly. 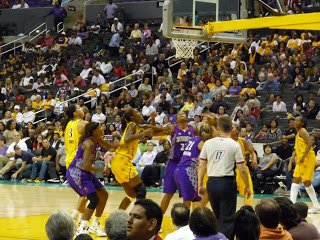 Ticha Penicheiro drives for the layup with about a minute to go. I wish the Sparks would attack the basket more.

Edit to add: Cooper is angry after loss: