The main gym can have three courts, so for the fourth court they used the “old” Mater Dei gym, aka the sweat box. It was pretty hot in there. But after six hours in the air conditioning I was cold, believe it or not.

The quality of play was top-notch. There are teams participating from California, Arizona, Texas, Montana, Utah, Wisconsin, Colorado, Oregon and Washington.

There were only two serious injuries, and each serves as a reminder of how resilient these girls are.

This morning a kid who is near and dear to my heart tweaked her shoulder in the second half of her game. Given her initial reaction, we thought she dislocated it. But an ice pack, a few hours and some laughs later, she was ready to go for the second game.

This afternoon I was watching a game on court 2, which meant that the bench of one of the teams on court 3 was directly behind me. Suddenly I heard someone gasping for breath – like out of the movies gasping – behind me. I turned around to see that the game had been stopped and the player was at the bench, her coach in front of her, making these deep gasping noises like she couldn’t breathe.

The coach was just standing there and someone said, have her sit down! So he did. I thought maybe it was asthma, but they said she got hit in the throat. Finally the coach told another girl to go get the trainer. I had turned around and kneeled on my seat and began telling her to calm down and relax, because being upset was only going to make it worse, and to breathe slowly. She did, and within 30 seconds she was starting to breathe more normally. The trainer showed up and asked her a few questions. The girl was breathing fine now, and maybe a minute had elapsed since I told her to calm down. The ref blew the whistle for the game to continue, and she jumped up and ran on the court. Her coach said whoa, whoa, whoa, come back here.

The girl really wanted to play, even though a minute before she probably thought she was going to die. I love that.

Just a few images from the day, but more to come later: 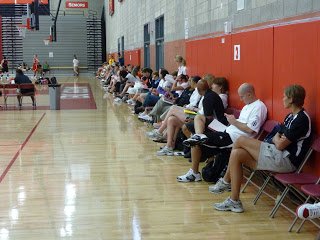 A buttload of coaches. I recognize most of them at this point, where if they didn’t have their school gear on I’d still be able to name them. 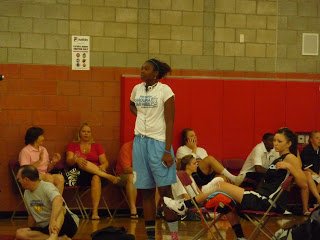 Former Los Osos star Cierra Warren was in the house, reppin North Carolina to the fullest. 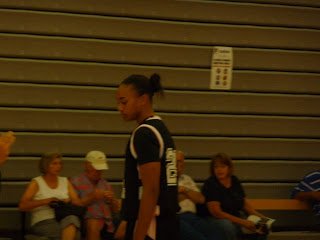 I know I’ve said this before, but Alexyz Vaioletama of Mater Dei is going to be a star, mark my words (here with the Irvine Sol during warm-ups).