What a difference from Friday night’s battle between the same two teams.

Two nights ago it was the Storm that took a big lead and fought off a surging Sparks team to salvage the win by two points. Tonight it was LA that took a strong lead in the second quarter, and never looked back. It was a balanced scoring attack on the part of both teams, but the Storm needed to be balanced in double digits, not single digits.

The refs: sucked. But that’s what you get when you have Kurt Walker and Bonita Spence. I surmise they watched the physical matchup between these two teams on Friday, because they called tonight’s game tighter than hell. Lots of ticky tack fouls.

The Storm: surprised me. Janell Burse and Suzy Batkovic-Brown each flopped once. Since when did Seattle become a flopper team? Stop it already.

Brian Agler: usually stands, but I don’t remember him standing at all this evening. Is he ill?

Shannon Bobbitt: is getting her Tennessee swag back. She’s playing with confidence lately, and it shows. She was really getting into Storm guard Sue Bird’s head tonight and throwing her off her game. Bobbitt isn’t messing up much anymore, either; tonight she had four points, eight assists and zero turnovers. Late in the fourth quarter she did some fancy dribble crossovers between her legs, and crowd went “oooo!” As she ran into the tunnel toward the locker room, she yelled back at some fans and pointed at them. Did a little hop skip and ran away. It was pretty damned funny. I’m glad the kid is feeling good about herself. She worked really hard on her game between last season and this one.

Kathy Goodman: predicted it. The Sparks’ co-owner said they were going to “kill” the Storm. The picture at that link well illustrates what Bobbitt has been doing to Bird lately.

Sparks still need to work on: offensive movement and continuing the box out late into the game. Bobbitt has been criticized for dribbling too much, but it’s usually because the rest of her teammates are just standing around the paint like trees. Move, ladies! The Sparks were boxing out effectively in the first half, but weren’t doing so in the second. Gotta play a full 40 minutes, ya know.

Anthem: was sung by a children’s choir, and it was great. Towards the end, the Storm players (with their backs to the choir) were turning around to look at the kids, and smiling. It was cute. Personally, I prefer the anthem be sung by at least a quartet, because the notes are too easily messed up by a solo artist.

Michael Jackson: was remembered with a moment of silence before the game, and in player videos. Several different players spoke about what he and his music had meant to them. It was really cool. And the Sparks played a few more MJ songs than usual during timeouts tonight.

Funniest moment: Late in the fourth quarter, Bobbitt went in for a layup and was forcefully shoved backward. She reeled, taking about six cartoon character-like steps backwards before she regained control and stopped herself, without falling, at half court. Everybody was just giggling.

Candace Parker and Lisa Leslie: weren’t on the bench tonight. Leslie were at the BET Awards. CP was reportedly at home with fussy Lailaa. When are we going to get to see this kid? 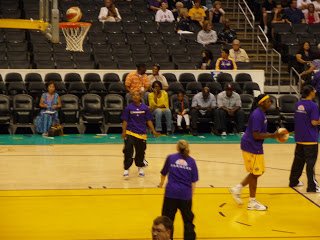 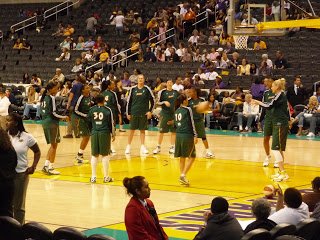 The Storm warm up before the game. 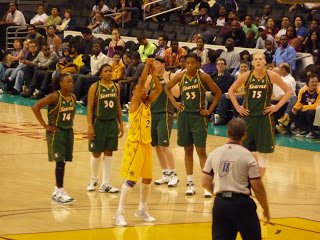 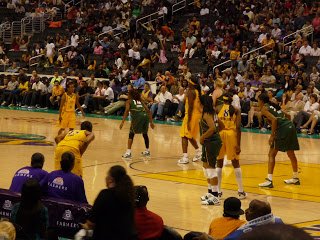 Bobbitt sets up the play in the fourth quarter.

Edit to add: Kathy Goodman’s reaction to the win.