Prep came out flat, and stayed that way. For a long time, guard Cheyenne Bonam seemed to be the only one who was hustling. Even so, the Generals lead the entire game, and withstood a Cajon run at the end.

I’d never seen Cowboys Coach Mark Lehman actually stand up and coach before these Watts Games. Today he took it one step further and publicly humiliated center Jazzmeen Williams. Displeased with her play, he pulled her out of the game a few minutes into the first half and shouted at her to go into the corner and face the wall.

I found out the name of Cajon’s other big girl whose shot I’d been impressed with last week: Patricia Brown, who will be a junior this fall. I’ll be watching her and Williams.

Narbonne lost all but one player coming into the 08-09 season, and it was tough going for a while. But the Gauchos are beginning to show signs of a comeback. The players who had moved up from the JV team now have a year of experience under their belts, and they’re looking better. They have all the right ideas and moves getting the ball to the hoop; they just can’t finish. If they can fix that problem, they’ll be lethal.

Poly lost a lot of people to graduation this spring, and they’re the weakest I’ve ever seen them. But who knows – with Poly, they might just have some girls on vacation. 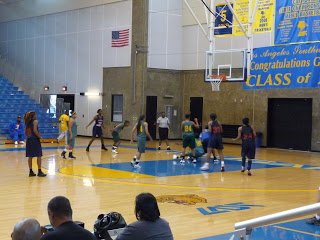 Washington Prep, in blue, and Cajon, battle in the first semi-final game. 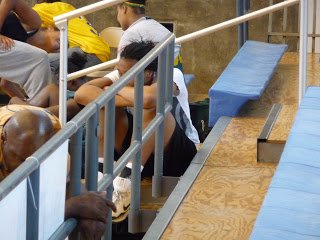 Coach Mark Lehman sent center Jazzmeen Williams, above, to the bench early in the first half, with the admonishment to “sit facing the wall.” Not sure if she made it there, but she sat like this for the rest of the game, and for a while afterwards. 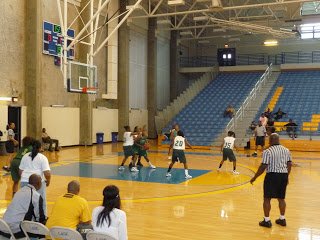 Narbonne, in white, and Long Beach Poly go at it in the second semi. Narbonne is looking much improved from last year, while Poly looks weaker. 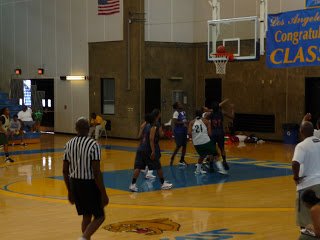 In the championship game Washington Prep, in blue, and Poly players watch a shot by the Generals’ Kejuana Gardner go up. 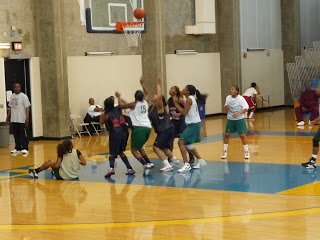 Players scramble for a rebound.

Prep again wasn’t playing like themselves, and Poly stepped it up from their semifinal game. Prep’s biggest problem in this game was not taking care of the ball, while Poly’s asset was good teamwork in passing the ball to the right people on the floor.

Participants each got a pretty gold medal for their efforts.