The Sparks just dropped their second game in three days tonight, to Minnesota. Bad shooting by all the bigs, Lisa Leslie fouled out in the third quarter, and the guards couldn’t do it by themselves.

I’m not sure what to think at this point. It’s only the third game of the season, and it’s a short but long season, so anything can happen by October. But I am a little surprised at the Sparks dropping two games in a row. I hope they don’t keep this up, as I’m not in a mood for a repeat of last year. 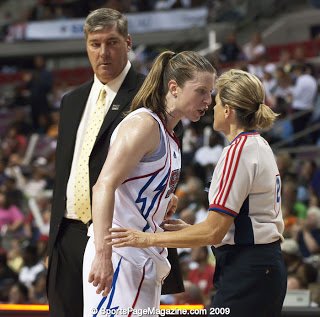 Katie Smith is getting in Courteau’s grill! The only thing funner than that is the look on Bill Laimbeer’s face. 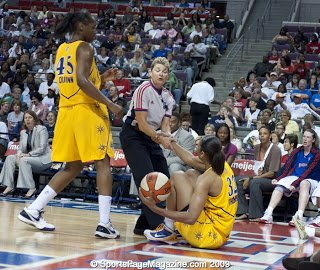 Perhaps Courteau is trying to enrage the Shock by helping Tina Thompson up. (Since when do officials help players up, anyway?)

Other teams are feelin it too, as the Storm lost their first game last night in Indiana, and Detroit lost to the now 3-0 Mystics tonight.

This is why I don’t make predictions.