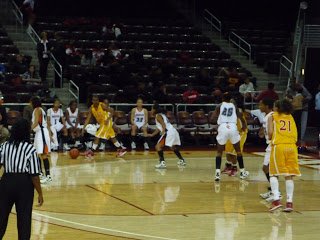 On the strength of a fourth-quarter surge, the Chatsworth Chancellors beat league rivals Taft to win the City Section Championship last night, 60-49. After evenly trading baskets for three quarters, Chatsworth broke away in the fourth, lead by All-American Gennifer Brandon and junior guard Monica Jackson.

The 6-foot-3 Brandon not only made big plays under the hoop all night, but she dribbled the ball the full length of the court twice – once taking it to the rack herself and the second time, outletting to a teammate for the bucket. It was remniscent of the multi-skilled Candace Parker, who is 6-foot-4. Brandon, headed to Cal next year, finished with 22 points, 15 rebounds, two blocks and a steal.

Jackson, with 15 points and five rebounds, seemed to be in the right places at the right times, all the time. But it was her sometimes-dazzling moves that seemed to impress the crowd most. In the fourth quarter, she stole the ball and then spun around under the hoop, away from her defender, for the layup. Chatsworth fans were on their feet, and it was that bucket that put the Chancellors up 44-39 at the 5:34 mark, and began their run. Brandon, who had scored only six of her points in the first half, put in more than that in the fourth quarter; she seemed hungry for the win.

Taft, fighting valiantly behind their crew of good shooters, suddenly began to miss shots in the last period. Junior guard Rmanii Haynes lead her team with 10 points and 10 assists.

Chatsworth won the title this year after losing in last year’s finals to Narbonne High School. Chancellors coach Michelle Chevalier had also lost to Narbonne in the same game in 2003, when she coached for Sylmar. And ironically, it was a game against Narbonne this season that kicked Chatsworth out of a slump, igniting them to a 17-4 season finish:

Nine games into the season, the Chancellors were just 5-4, riding a three-game losing streak at the Nike Tournament of Champions in Phoenix. Not exactly a running start.

It would only take one game to get back on a roll though, and in a weird twist of fate, that opponent was Narbonne, the team that had ruined Chatsworth’s season twice a year before.

On the other side of the Los Angeles metro area……………..

Cajon did indeed beat Poly last night. Strangely, OCvarsity.com has no story on arguably the biggest game and upset of the Southern Section tournament so far. I am dying to know how it went down, who scored what and what went wrong for Poly. Tidbits on socalhoops indicate that both Darshae Burnside and Layshia Clarendon of Cajon were in foul trouble in the second half, but kept Poly down 8-10 points when one or the other was on the bench. OCvarsity.com better get off their cans and post a story about this upset of the defending state champions by basically two players.

Down the road at the Mater Dei-Beverly Hills game, MD sophomore forward Kaleena Mosqueda-Lewis scored 41 points in her team’s 81-42 route. This isn’t the first time Mosqueda-Lewis has come close to outscoring an opponent on her own. It’s ridiculous.

Is there anyone to stop Mater Dei this year? I think not. This piece says MD is ranked third in the nation. If they’re third, who could be first and second? I’d like to see those teams.