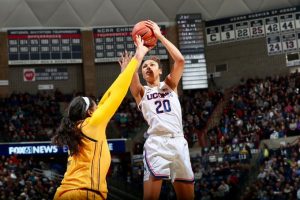 Do not fear the Huskies. At least for now.

No. 4 Connecticut defeated inexperienced California on Sunday, 72-61, in their season opener. But the dejected looks of the only four Husky players to score field goals better reflected the uninspired performance of the team as a whole: the scorers looked somber and embarrassed.

And their feeling were justified. This is not a team ready to compete at a high level.

To be fair, the Huskies were getting their shots all game. They ran plays reasonably well early on – particularly for a team whose half-court offense has not matured. But they missed layup after layup. Fortunately for the Storrs faithful, Cal shot even more miserably.

On this day, senior point guard Dangerfield approached coach Geno Auriemma in the second half and told him, “I don’t think we should run any more plays.”

Auriemma recounted asking “Why not?” and receiving the reply, “Because I don’t think anybody knows them.”

The hosts were forced to rely on the one-on-one skills of Williams and Walker, rather than the pass-pass-pass-shoot style that has historically put UConn at the top of the assist rankings.

Auriemma said the game was “weird.” He said it three times before correcting the appellation to “sh**ty.”

In fact, it was dreary, boring basketball by two teams that will need a lot of work. California shot 35.3 percent, Connecticut 41.5 percent. Each team grabbed 43 rebounds.

The Huskies have a bunch of problems, but perhaps the greatest is that Auriemma has no idea who his fifth starter should be. Freshman Anna Makurat, who played professionally in Poland, started both exhibition games. But little-used senior Kyla Irvin started the season opener – the first start of her career. Her entire line in the box score was one rebound and one foul in 11 minutes.

Asked why Makurat did not start, Auriemma said, “I thought Anna would cry if I started her. I thought I’d make her feel a little bit better. She’s been in a little bit of a daze the last couple of days.”

Much is expected of Makurat, who seemed to have more maturity than her 17 years because she had played in an adult league. But thus far, she has seemed overwhelmed by the college game. She played 18 minutes Sunday, scoring one point and adding two each of rebounds, assists and steals.

Freshman Aubrey Griffin participated for just under 19 minutes. She also had a single point (and three missed free throws) to go with two each rebounds, blocks and steals.

The rest of the UConn bench was missing in action. Senior Molly Bent never entered the game. Redshirt senior Batouly Camera is once again out injured, as she has been most of her career. Tennessee transfer Evina Westbrook, the Lady Vols’ leading scorer a year ago and a certain starter on this team, was denied a waiver to play without a year off, and awaits an appeal of that decision. Grad student Evelyn Adebayo, who played last season at Murray State, barely saw action in the exhibitions, and never entered the game.

So right now, the Huskies essentially have four players who can actually contribute, and a bench that managed two points in 37 minutes of play. If this is actually the fourth-best team in the country, women’s basketball is in trouble.

There is a lot going for UConn, too. History says they can’t be this bad for long. Auriemma says that Griffin is the best pure athlete he has coached, including former standout Gabby Williams, who bore that label for four years. But Griffin has had difficulty learning plays and executing them on the court.

Walker has taken a huge step this year, and could be one of the elite scorers in the game by year’s end. She is demanding the ball, and she has a reliable three-point shot. But most importantly, she is scoring on drives, on mid-range pull-ups, and doing so while continuing to rebound above her 6-1 height.

Williams has also accepted that she has to be a primary scorer, and looks as though she is ready to build on the promise, unevenly demonstrated, that she showed last season. She, too, has a reliable three. But her greatest skill is her quickness to the basket. No more than a handful of defenders in the country can stop her from getting into the paint and to the rim. She still seems unconvinced of this herself, but is sure to have it reinforced by her coaches until it becomes a natural part of her offensive game.

Dangerfield came into the season as one of the better point guards in the nation. She can score when she needs to, which will be often this year. But distributing to this team is going to be much more difficult than zipping the ball to Napheesa Collier or Katie Lou Samuelson, who went into the WNBA last summer, for an almost certain score. Dangerfield’s current team lacks both the confidence and variety that has traditionally allowed them to have outstanding spacing, which opened up passing lanes.

Dangerfield is dealing with some great talent, but also talent which may not “know the plays.” It will be an adjustment. Furthermore, she is the lone (contributing) senior, and the only obvious team leader, a burden she will need to carry alone. That in itself can be disturbing even to a player of her ability.

Her ability to handle all these changed roles will have much to say about the Huskies’ final standing in March.

Finally, there is 6-4 sophomore Nelson-Ododa. With a summer of USA basketball behind her, she has shown more confidence, and a willingness (mostly) to be the rim-protector this defense requires. Her development is crucial to UConn’s success or failure.

Auriemma has already said more than one that “Liv is the only player we absolutely have to have on the floor.” There really isn’t another option, with only Irvin – a slower and shorter (6-2) athlete – to substitute for Nelson-Ododa’s in the paint. Griffin’s athleticism can help defend inside, but she is only 6-1, and not yet as strong as the program model for short posts, Gabby Williams.

Makurat has scoring and distributing experience, but it is easy to forget that she turned 18 just this week. She will need to relax into the game if she is to contribute as the coaching staff hopes she can.

The Huskies, of course, have played just one game. But the team looks adrift, which is rare in the Auriemma era. They really need some bench contributions this year, but so far the bench looks as ineffective as it has for the last few seasons.

Auriemma may have one of his greatest coaching challenges if he is to turn this team into a contender. But then again, he’s the best there has ever been in the women’s game, so he could easily succeed.

What is nearly certain is that this UConn team is going to lose some games before the season ends. With a tough non-conference schedule, the losses could come early and often.

A few other things happened today too