Minneapolis – Whenever the Los Angeles Sparks and Minnesota Lynx face off, fans can count on an intense battle between some of the league’s best players in what many call the WNBA’s best rivalry.

Thursday’s match up between the two teams was no different, with Rebekkah Brunson, Sylvia Fowles, and Maya Moore facing off against Nneka Ogwumike, Candace Parker, and Chelsea Gray. The Sparks had won the last four regular-season match ups and the Lynx were ready to put a tally in the win column, especially after Tuesday’s horrendous loss to the Fever.

Fortunately for Minnesota, Los Angeles stopped sparkling after Independence Day. Brunson had her second big game in a row, this time breaking the WNBA all-time rebounds record in the process, while scoring 15 points. Fowles had a game-high 27 points and Lindsay Whalen added 10. Los Angeles shot just 42.4 percent from the floor, including 30 percent from beyond the arc (6 for 20) while the Lynx went 51.8 percent from the floor, including an astounding eight for 13 from three-point range.

Fowles said the team watched a lot of game film in preparation for the showdown.

“Two days make a whole lot of difference, especially when you can put eyes on things,” Fowles said. “Like I said, the stuff that we watched was very correctable. Just going out there with a clean slate, knowing that it was a new game and just trying to play my game and take what LA gave me. Everything pretty much just worked in our favor tonight.”

Doubt crept in early for Minnesota as Ogwumike started the game with two easy baskets to put the Sparks up 4-0. Brunson added a layup to put the Lynx on the board and Maya Moore added two free throws to tie the game early. Minnesota went on an 8-3 run to extend their lead by seven. Gray hit two late free throws to limit the damage to just five after the first quarter.

Both teams continued to trade baskets in the next frame, with the Lynx’s lead never extending past seven. Gray and Okwumike added baskets with five minutes to play in the first half before Danielle Robinson scored on back-to-back possessions to extend the Lynx lead back to six. They took a three-point lead into the break.

The second half alone provided enough drama for an MTV reality show, as the the physicality of play elevated and with it, tempers. Minnesota closed out the third quarter on a 23-12 run, extending their lead to 13. Neither team could buy a basket to start the fourth period. But midway through Robinson worked the ball down to Fowles, and the Los Angeles defense wrestled it out of her hand, which lead to an Odyssey Sims layup on the other end.

Reeve was livid and yelled at the officials, after which she was assessed a double technical and ejected from the game. Lost in the collective moans and groans from the Target Center crowd was the fact that Brunson had just become the WNBA’s all-time rebounds leader. Two minutes later, the public address announcer notified the crowd of Brunson’s accomplishment, followed by a standing ovation.

With Reeve in the locker room, Fowles took over the game, leading a scoring run that put her team up by 15 points midway through. The Sparks made one final push, but could never get the lead to within nine as the clock ran out. Fowles ended the game making 10 of 11 shots and seven of her eight free throw attempts. She fell one rebound short of career double-double No. 140, while Brunson’s double-double moved her into sole possession of sixth place, surpassing former teammate Yolanda Griffith with No. 82 in the victory.

Reeve said Minnesota was ready for the game.

“I know what I expect in terms of how hard we are going to play,” she said. “I don’t know if I know what to expect about how we are going to play. Whether we will be able to execute or do what we are supposed to do. I never know that. That’s always more of a fingers crossed moment. No coach knows that. I know that we feel a little better physically than we did on Tuesday. Obviously, a loss like that sometimes serves as motivation.”

Los Angeles coach Brian Agler said his team didn’t step up down the stretch to make a serious run.

“I thought Minnesota played well and I thought we did some good things, but we didn’t make the plays in big moments like they did,” he  said. “They made some really big plays, and Sylvia had a big night. We didn’t do as good of a job as we would’ve liked. They hit some timely shots and shot the ball well from the three-point line. I thought we had some chances, you know, we had some chances to get over the hump and just never could get over that.”

As Brunson was interviewed in the locker room after the game, her phone continuously lit up on her armrest with friends, family and former teammates congratulating her. Former record holder Catchings also weighed in on Twitter.

Minnesota has won eight of its last nine games, dating back to June 16, and is 1-2 this season against Los Angeles, with one more match up in the series slated for Aug. 2. The Sparks (12-7) dropped their second game in a row.

Tonight was the 63rd regular season match up between the Lynx and Sparks. Los Angeles leads the series, 46-27, and is 19-18 in Minnesota.

This was the first time since 2015 where both teams faced off against each other following a loss.

As of July 5, 11 players from the Lynx and Sparks are in the top-40 of fan votes for the WNBA All-Star Game. For more information about how to vote, fans get click here.  Twenty-two players will make up the final rosters, to be announced July 17.

Cheryl Reeve became the all-time winningest female coach in the league with the win.

While Whalen won game No. 318 of her career, Brunson moved up to third on the list, tying DeLisha Milton-Jones with 291 victories. Brunson’s five championship rings remain the most in WNBA history. 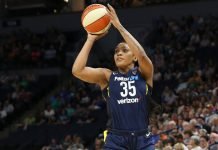 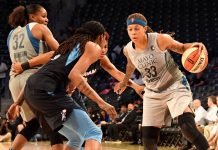 Liberty-Mercury fight: some writers need to take a chill pill

Another one bites the dust

The Olympics are coming!