Home Features Whalen excited for dual role on and off court

With 105 minutes left until Saturday’s Minnesota Lynx preseason finale vs. the Chicago Sky, Lindsay Whalen sat on the Minnesota bench for about 30 seconds before walking to half-court and grabbing a basketball.

From there, the Lynx guard and new Minnesota Gophers women’s head basketball coach walked across the floor to talk to a handful of the fans that made their way down to the courtside seats. One of those fans was Obadiah Gamble, made famous by his “Hey Teddy” YouTube video that he made for former Vikings quarterback Teddy Bridgewater when he was six. Gamble, now eight, sang the national anthem at the Lynx game.

Talking to fans and engaging in pregame shenanigans – including dancing – is nothing new for Whalen in her 15th WNBA season. What will change, however, is her schedule now that she is both a professional athlete and an NCAA Division I coach.

Her pregame routine is just one casualty.

“Last year I would have woken up about 8:30 or 9 for shootaround,” Whalen said. “This morning I was up at 6:30 or 7, getting stuff done, sending emails, looking at things.”

After hiring her coaching staff last month, Whalen hit the recruiting trail and got quick results. Last week local recruit Sara Scalia of Stillwater High School announced her committment to the Gophers. A couple days later, Whalen landed her first out-of-state recruit in Mercedes Staples. The guard had originally committed to Clemson, but requested a release after the school fired coach Audra Smith.

“When you are working two jobs, there will be certain tasks that I’ll probably have to do,” she said. “It might change my routine a little bit, but it’s all really fun stuff.”

Minnesota easily handled Chicago in the matchup, 87-58. It was the first time the Lynx had played in front of fans at Target Center since Game 5 of the 2016 WNBA Finals. In 2017, the team’s home court was Xcel Energy Center in St. Paul, as Target Center went through renovations. New amenities include upgraded seats, a brand new scoreboard at center court and a new locker room for the Lynx. Coach Cheryl Reeve said the team is happy to be back.

“We are still getting used to the locker room change and which way we come in,” Reeve joked pregame. “If you see us wandering around, we don’t know which way to go. Hopefully, this new locker room will be good to us.”

Whalen said she appreciates that commuting time to their old home court is less of a chore.

“There is less time in the car now,” Whalen said. “Most of us live closer to Minneapolis, but we made the best out of the situation (last year). It’s definitely nice to get back here and get in the Target Center flow.”

“We’ve never been in this locker room before so getting in here and just doing what we need to do to get in that rhythm is nice. It was good to get a home preseason game to make sure we are ready for those little parts of game day.”

On the court, things didn’t look much different for defending league champions against the Sky. They got out to a 31-13 lead with 5:01 left in the first half, and coasted to a 40-21 halftime lead. Sylvia Fowles scored a team-high 13 points and added seven rebounds by halftime. The hosts moved the ball around the court swiftly while cheering each other on from the bench. Reeve was vocal, continuing to focus on the little things that have helped Minnesota win four WNBA titles in the last seven years. And at the final buzzer, it looked like last season never ended. Fowles led them with 17 points, while Maya Moore added 15.

Whalen finished with six points, three rebounds and three assists in over 13 minutes of play. Her team had a +/- of 16 when she was on the court, and she made the only two shots she took, both from beyond the arc. On the bench Whalen made her presence known, cheering loudly for her teammates, which included rookie Carlie Wagner. The Gopher grad made her first basket of the night in the fourth quarter, laying in an acrobatic shot that got the crowd of 5,024 to its feet. Whalen stood too, and jumped on the back of a nearby teammate as she yelled for Wagner.

Minnesota opens the regular season May 20 hosting the Los Angeles Sparks, in a rematch of the hotly-contested WNBA Finals of the last two seasons.

Whalen said she feels lucky to be able to do what she loves every day.

“I always get to focus on basketball,” Whalen said of her jobs as both a coach and a player. “I get to work on getting better, whether it’s working on something so that the season in the winter goes well with the Gophers, or whether it’s here for the Lynx to make sure we have a good summer.” 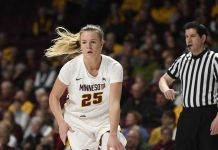 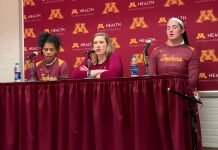