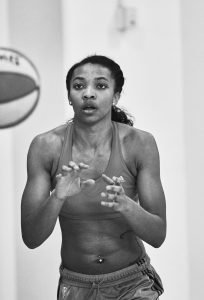 Imani McGee-Stafford finished her second season in the WNBA last summer playing for the Atlanta Dream. In October she went to China to play a half season, and when finished in December, she embarked on a Thailand vacation. In March, the former Texas Longhorn standout traveled to Lebanon to play with another team.

To stay in shape for her second overseas sojourn, McGee-Stafford got with her longtime trainer, Olin Simplis, when she returned home to Los Angeles. He put her through conditioning and skill work, as he has since she was 15 years old.

“Olin is a part of my village,” McGee-Stafford said. “My success is directly correlated to the time, love, and energy he has poured into me.”

All photos by Maria Noble/WomensHoopsWorld.

Tennessee’s Amber Gray has shoulder surgery, will be out six months

Albany regional features the best of the East and West