Just as she had in the semifinal two days ago, Ogunbowale made a shot – this time with .1 seconds left – to lift the Irish to the 61-58 win over Mississippi State. And she did so 17 years to the day since Notre Dame last won a national title.

The junior star made a similar shot Friday with one second to go in overtime to guide the Irish upset of Connecticut, who had lost in the same fashion to the Bulldogs in last year’s semi.

The final play against the Huskies was designed for Ogunbowale, but against Mississippi State, she was the secondary option. Jackie Young was supposed to get the ball to center Jessica Shepard.

“I didn’t like the way it looked,” Young said. “I knew if I threw it, it would have possibly been a turnover. So I talked to Arike before, and I was like, if the matchup doesn’t look right or if Jess isn’t in the position that we’re looking for, then come back to the ball. And I just made sure that Arike was literally coming to the ball before I passed it to her.”

“We had confidence in her. As soon as she put the shot up, I knew it was going in.”

Shepard led the Irish with 19 points, while Ogunbowale scored 18 and Marina Mabrey, 10.

The improbable ending came after a poor start for Notre Dame, as they were held to a season-low 17 first-half points, including only three in the second quarter, as the Bulldogs had a 30-17 halftime lead. But the Irish regained themselves in the third quarter to make a 16-1 run and tie the score at 41 to end the third period.

In the fourth quarter Roshunda Johnson, whose three-point shot sent Mississippi State to overtime in their Friday semifinal against Louisville, made a trey at the 1:54 mark to give her team a 58-53 lead. Mabrey answered with a three-point shot of her own, and Young scored with 45 seconds left to tie the game at 58.

After alternating turnovers, Ogunbowale executed the final sequence to push Notre Dame over the top. They have been to four other championship games since and lost each one, until now.

“I couldn’t honestly believe that it went in,” coach Muffet McGraw said of Ogunbowale’s shot.

The win capped a remarkable season for the Irish in which they lost four starters to ACL tears, but lost only three games, and never fell out of the AP top five. Throughout the NCAA Tournament, they mounted three come-from-behind wins.

McGraw said Saturday that after each player loss, the team continued to focus on what they still had, rather than what they no longer had.

“The fighting spirit of Notre Dame is just amazing,” McGraw said. “Relentless, competitive, they have a swagger, they believe in themselves with the confidence that starts with Arike and Marina, and just filters down through the team.”

For the Bulldogs, the loss was especially painful because it marked the second straight year that they fell in the championship game. Coach Vic Schaefer said the blame rested with him.

“He said it was his fault because he didn’t get us home, but at the end of the day, we had to go out and execute,” he said. “I think one time we need to accept that we didn’t make that ‘one more.'”

“The integrity and the character of this group is something I’ve not seen,” he said. “I’m so proud of them. I’m proud to be their coach. I’m proud of their fight. They’re going to be successful in life because of their grit, their determination, and how they embrace the grind of life as well as the grind of basketball.”

Several Notre Dame alumni were on hand to celebrate the title win, including Skylar Diggins-Smith and Natalie Achonwa, who guided the team to four semifinals between them, and Ruth Riley, who captained their first championship in 2001.

“There have been so many great teams and so many players here with us celebrating in the locker room just now, all the former players,” McGraw said. “And we talked about how we’ve done it for all of them that weren’t able to finish the job. So this team is really special because of their personality.” 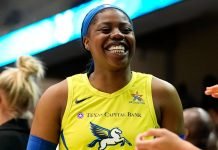 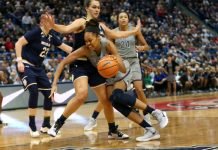 Analysis: Despite being outplayed, UConn finds a way to beat Notre Dame

Catching up with Alyssia Brewer

Lots of “the three to see” in the news