Home College Western Kentucky’s Tashia Brown quietly becomes a leader, and one of the...

Western Kentucky coach Michelle Clark-Heard had traveled to get to tiny Valdosta, Georgia. But she knew she’d found what she was looking for when she walked into the gym at Lowndes High School.

“We actually just saw her work out,” Clark-Heard said of star forward Tashia Brown. “We didn’t see anything else.”

Brown had reached the 1,000-point club and averaged 22 points per game her last two years at a high school known more for football. Yet, Clark-Heard didn’t need to see any of that. Brown’s work ethic and sweet jump shot sold her on the spot.

“She had so much ability, and she was really athletic and could jump,” Clark-Heard said. “She has one of the sweetest pull-up jumpers I’ve ever seen.”

Offering Brown a scholarship was an easy call, though Brown was largely unknown because she’d never played on the club basketball circuit. But if there was any risk in that decision, Brown has proven her worth as a Lady Topper, and then some.

The senior has been an all-Conference-USA team selection the last two seasons, averaging about 17 points per game. She was an all-conference freshman and reached 1,000 career points as a junior. This year she is scoring almost 23 points per outing – tops in C-USA – which was a factor in her being named the Conference’s Player of the Year earlier today.

“It was very humbling, I was surprised,” Brown said. “But it showed me that my hard work was paying off, and it opened my eyes to what I could be.”

Clark-Heard, who said Brown is “like a daughter” to her, was thrilled.

“When we saw each other (after the announcement), we just hugged,” said Clark-Heard, now in her sixth year running the program. “I told her how proud I was of her, and that no one since I’ve coached here has gotten a recognition like that, and that we’ve done some amazing things.”

Western Kentucky has indeed vaulted to new heights the last three years, in particular, with two regular-season titles and two NCAA Tournament appearances. But the equally-high trajectory belongs to Brown, whose mature disposition and relentless quest for improvement has driven her from humble beginnings, through tragedy, and now to a shot at a professional basketball career.

Clark-Heard has no doubt she’ll be successful.

“I think Tashia will be a great pro player because of her ability to create her own shot off the dribble,” Clark-Heard said. “She has the ability to handle any pressure situation, which will be a plus for her at the professional level. She has been clutch throughout her career, and has no fear.”

That fearlessness is apparent off the court, as well.

Brown was raised by her grandmother, whose example was one of the reasons she first picked up a basketball in sixth grade.

“I started playing because my dad played and my grandma played,” Brown said. “She’d always been my inspiration.”

By eighth grade she realized she had a talent for basketball, and she was right in the middle of an outstanding season when the unthinkable happened.

“I was sitting in my classroom and my sister, who also taught there, called me and told me that Tashia’s grandmother had passed,” said Amanda Hughes, who was Brown’s basketball coach that year. “She had lived with her grandmother her entire life. I said to my sister, ‘no, no, that’s her mama.’ It was a life-changing event.”

Incredibly, Hughes got a text from Brown 15 minutes later telling her she wouldn’t be at practice that day.

“She needed somebody, and for some reason she turned to me and I couldn’t turn away,” Hughes said. “Our oldest stepchild moved in and lived with us when Tashia was here. It was tough balancing basketball and everything else, but we made it work.”

Hughes said she tried to keep Brown busy so she wouldn’t be consumed by her grandmother’s death.

“She didn’t let her grief get her,” Hughes said. “Of course she had moments where she got upset, but I reminded her to keep going.”

Having a stable home environment in high school allowed Brown to blossom. On court she became the ultimate athlete and teammate, and off court she worked towards college.

“Tashia is unique in that she’s the most humble person and player, very unselfish and a team player, and she is always wondering what she can do for her team,” Hughes said. “She has always stayed very grounded in everything, and has kept her focus.”

“Other kids might drift from their goals, but she stuck with hers. She never lost focus; she is determined. Many nights when she was here we would talk about her future and her life goals, and she’s stuck with her plan 100 percent. She’s a good kid.”

“When I lost my grandmother, I knew I was going to get a scholarship for her,” Brown said.

Without financial means to join the club ball circuit, Brown was at a disadvantage when it came to recruiting. But her high school coach knew Lady Topper associate head coach Greg Collins, and when they offered her a scholarship after their visit, she accepted.

As Brown left for Western Kentucky, it was the first time she’d been out of her home state. At school, however, she found a mentor and advocate in Clark-Heard, who took to her immediately.

“She shot over the top of the (male practice players) and no one could guard her,” Clark-Heard said. “She ‘Yes ma’amed’ me to death. I love Tashia.”

Brown had success on the court in her first season, but it still left her hungry for bigger things.

“I had played significant minutes with some great seniors, but I wanted a championship,” Brown said. “Coming in I was very slim, at 130 pounds, with no muscle at all. Off season I worked hard at conditioning, skill development and defense, and I put on some muscle. That’s how I developed my jumper. My focus was on getting better and getting more playing time.”

Her work paid off as a sophomore when she was named to the C-USA all-conference first team. She averaged nine more points per game than she had as a freshman, despite having to switch positions and play guard in place of an injured player. Clark-Heard was not surprised at Brown’s improvement and versatility.

“She has a tremendous ability to grow her mind with the game,” Clark-Heard said. “She watches a lot of film, a lot of basketball. These days a lot of kids won’t watch much basketball, but when you don’t, it hurts you. When she started watching more, she understood the game better.”

Last year the injury bug hit Brown, and it tested her.

“As a junior I had a couple of nagging injuries, and I tried to stay focused mentally,” she said. “But when you don’t perform how you want, it is mentally draining. Then after I was healed, it was getting over that mentality and coming back and playing.”

True to form, Brown kept her struggles hidden, according to her four-year roommate and best friend, forward Ivy Brown.

“She has a fantastic work ethic, and when she battled injuries last year you would never have known it because she came in every single day and worked hard,” Ivy Brown said. “Sometimes I forgot she was battling, because she gives it her all and never lets people see that she’s hurting.”

“My favorite thing about her is that she battles and no one knows. She’s a really good leader and is good at connecting with people. She’s good at motivating people – especially young kids – and picking them up when they get down.”

Brown’s success this season, in particular, is no surprise to her coaches, teammates and family.

“She came in her freshman year and was fantastic, and to see her work even harder was amazing,” Ivy Brown said. “And it’s pretty cool to see how all her hard work has really paid off, and the way she’s become better every year. It is a testament to her work ethic.”

Clark-Heard has put the Lady Toppers against Power Five schools as their record has improved. She has also coached two years for USA Basketball.

“I’ve seen some of the best players in the country, and Tashia is right up there with them,” Clark-Heard said.

Brown’s self-confidence has grown right along with her game.

“When she first came she was so shy she would hardly say anything,” Clark-Heard said. “Now she’s right there in all the press conferences.”

Hughes, who drove up a few weeks ago for Senior Night, said she has also noticed Brown’s growth.

“That makes me feel good that she’s grown confident where she is,” Hughes said. “This past year, especially, she’s really grown and played to the potential she has always had.”

Second-seeded Western Kentucky begins conference tournament play tomorrow, and hopes to make a return to the NCAA Tournament. But regardless of the outcome, Brown has her eyes set on playing professional basketball. Clark-Heard is helping her find representation, and Brown will play in one of the WNBA combines at the Final Four in Columbus later this month. If she is not drafted or signed by the league, Brown will play overseas.

“I would like to be drafted, but I will definitely go overseas, put up numbers over there and get seen,” Brown said.

Clark-Heard said she will continue to help Brown until she leaves campus for the last time.

“I’ve tried to put her in a position to keep growing, because at the next level you have to be really ready to grow,” Clark-Heard said. “I love her to death, and this is her dream.” 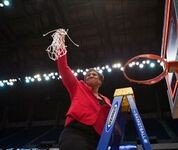 A close and competitive Texas-NC State game ends with a charging...

The rest of the story