Down with 11 seconds left in the Big West Championship game last March, the UC Santa Barbara Gauchos found themselves in the midst of the most intense possession of their season.

The team had entered the tournament with a .500 record, but won its first two tournament games in convincing fashion, setting up a showdown with Long Beach State for the title. The Gauchos started off slowly, but began to dig their way out of a double-digit deficit in the second half. With 2:04 remaining, they took their first lead of the game.

The 49ers regained the lead with a layup, leaving the Gauchos 11 seconds to decide their fate. Following a timeout, UCSB ran a handoff for point guard Drea Toiler, who drove to the paint and kicked the ball out to Sarah Porter.

Porter, who had broken the Big West Tournament record for most made three-point shots – going 9 for 11 from beyond the arc against UC Riverside – was in her sweet spot.

“We gave ourselves a chance. We’ll kick ourselves for a while but we’ll get better,” Gaucho coach Bonnie Henrickson said after the game.

But for UCSB, that painful feeling was something new. Just two years earlier, they would never have dreamed of making a conference tournament run, let alone coming remotely close to a championship.

In 2014-15 the Gauchos were just 2-27 overall, with both victories coming in conference play. That led to the firing of coach Carlene Mitchell and the hiring of Henrickson, the former coach at Kansas.

In taking the post, Henrickson knew that changing the culture of the program from the ground up was necessary for success, so she set to work.

“(She) wanted us to know how she ran her program, and we followed pretty well,” Durr said. “She set expectations off the court as well.”

Assistant coach Nate Fripp said those high standards were expected of the coaching staff, as well.

“She wanted everyone — players and coaches alike — to give their all into the season. She made that clear early,” he said.

Henrickson started with establishing trust between coaches and players.

“I wanted to communicate and get them to buy in,” she said. “I feel that for players to buy into the culture change, they have to buy into me and my vision first. I wanted each player to know that even though I wasn’t the reason they were there, I was committed and excited for the opportunity to coach them.”

Henrickson quickly gained her team’s trust through preseason workouts, team bonding at her home and an through her open-door policy at school.

“(Coach Henrickson) emphasized championships,” Durr said. “She explained the time and effort it took and made us believe we were capable of winning, whereas before it was like yeah we want to go to the Big West Tournament but it wasn’t like a real goal.”

Henrickson’s track record also helped, as she led the Jayhawks to 186 wins and  two NCAA Sweet 16 appearances during her tenure. In coming to Santa Barbara, she discovered that in order to be successful, she needed to conform to her new team.

“We play more motion (offense), and have a better three-point arsenal,” she explained. “We have the best three-point percentage of any team I’ve coached. We tried to isolate players and struggled. We switched to our motion, built on it and found success there.”

Henrickson’s adjustment allowed for multiple players to flourish in her first season. Junior guard Coco Miller excelled that year, her freshman campaign. Her 187 three-point attempts rank fourth in school history, and her season-high 24 points at Wyoming tied the tenth-most points in a single game by a UCSB freshman.

“We identified that our offensive style at the time wasn’t good and we changed it,” Miller said. “This really created more ball movement and I got better shot opportunities.”

Henrickson is a game film junkie, and instilled in her players the importance of learning from past performances. Film references also allows her to talk with athletes about the big picture.

“Coach is really straight to the point,” Miller said. “When we sit and watch our film, there is never any beating around the bush. We are always aware of what we’re doing right and what we’re doing wrong.”

The Gauchos have a rich basketball history, holding the most Big West Conference tournament titles (14), with 11 regular-season titles, as well. In 2004 they advanced to the Sweet 16 before losing to eventual champion Connecticut. UCSB continued to make tournament runs until the 2013-14 season, where they fell to an overall record of 8-22.

Then came the dismal campaign the following year that sparked change.

“We really didn’t have a goal, Durr admitted.

That changed with Henrickson and her assistants.

“One of the biggest things coming in was for us, as a coaching staff, to emphasize the overall end goal of winning a championship,” Fripp said.

Porter transferred to the school during Henrickson’s first year from Mississippi after a quick courtship.

“When I first stepped on campus for my official visit, (Henrickson) made it clear that she wanted to win a championship, and that it will take time and require a lot of work,” Porter said. “From that point, I was sold.”

Durr said goal-setting has given the team a razor-sharp focus.

The Gauchos were able to make the transition thanks to the work and effort in practice, and especially endurance.

“We take pride in hard work,” Henrickson said. “Preseason is a lot of teaching. We are very big on player development. It’s a lot of ball handling, shooting, and breakdown drills. Sometimes we break it down to small groups for volume shooting, then we’ll throw everybody together for team drills.”

In her first season, Henrickson guided UCSB to and 8-8 record in conference play.

“Just her goals and expectations made me believe it was all possible,” Porter said.

The Gauchos finished fourth in the conference last year to make their Cinderella run in the Big West Tournament. It felt, to athletes and coaches alike, that the program had made a turnaround.

While UCSB showed significant improvement in their record, they also grew as a team off the court through the support of boosters, community outreach and in forming strong bonds.

The boosters are more than donors. Through the Living Scholar Program, they are able to be part of player’s lives on and off the court. In this program, each player is adopted by one booster and is treated like a family member. Some players receive text messages after rough games from their booster, while other have home-cooked meals. The program allows for each player to have a home away from home.

“(They) are there whenever you need them,” she said. “The support I got from my booster helped me in my transition from high school to college. We have tons of home away from home.”

Along with those personal connections, the program also reconnected with the Santa Barbara community. One of Henrickson’s goals coming into her first year was to grow the team’s fan base.

One of the ways they do that is by hosting camps where local kids can come out and work out with the players. The Gauchos also go out to local schools and volunteer for the Special Olympics, among other endeavors.

“It’s hard telling people near the Thunderdome, ‘come see us, come see us,’ without saying, ‘hey we’re going to come see you and give back,’” Henrickson said.

The team has gone to hospitals to sing Christmas carols to terminally ill children, and they have made trips around town to personally invite people to their games. Durr said she and her teammates want to encourage more kids to come out and support their team. After games, players sign autographs and take pictures with the children.

The community activities have also helped the team bond. Durr said they are “one big happy family.”

“(The coaches) are really cool off of the court, so we’re all really close,” she said. “No matter what kind of day we have in practice, we can always talk to them about literally anything.”

Porter said the caring of the coaching staff is evident.

“They care more about your well being on and off the court,” she said.

Such testimonies are music to Hendrickson’s ears.

“I wanted everyone to know we were here to take care of them,” she said. “I never wanted anyone to think we were trying to run them off. Even when we talked about the previous season, I only used ‘we’ and ‘us.’”

The hard work and personal relationship forming has paid off in a short period of time for Henrickson and the Gauchos.

“I told everyone that the quickest way into the dog house is to not take care of your teammates,” Henrickson said.

The message has been received.

“Our culture is built on our relationships with each other,” Durr said. “On and off the court we have great chemistry. We’re hanging with each other off the court. We have fun in pickup games together, team bonding at coach Bonnie’s house, and we even joke in a team group chat. We’re around each other 24/7.”

Miller said their strong on-court chemistry comes from the relationships they have off of the court.

“The biggest thing with our team is our bond. We’re always around each other,” she said. “We laugh together, struggle together, we go through things every day as a unit, and that built our family.” 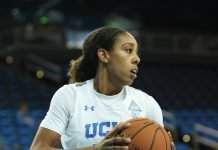 Bruins use defense to rout Gauchos, 74-44

Catching up with Coach Summitt and the Lady Vols