It was mid-July, and the mood in the Connecticut Sun locker room after their first loss in six games was notably not downcast. In fact, it was upbeat.

The Los Angeles Sparks had just snapped the young team’s second five-game winning streak with lockdown defense, but afterwards, not one Sun player seemed the least bit daunted. Athletes answered reporter questions with smiles, and they joked with each other in off-moments. Perhaps most significantly, they seemed to have already moved past the loss.

“I don’t think (this has) changed our morale much. I think we can play with them and we can play good basketball with them. We just wanted to come in and do our best,” center Jonquel Jones said after playing the defending champions. “(We) don’t let things we can’t control get to us, but….if we see them later on down the road, it’s going to be different.”

Forward Alyssa Thomas was similarly ready for the next opportunity.

“We know we can play with them any night, so you’ve got to give us a lot of credit,” Thomas said. “I’m proud of how we fought tonight, and we have to learn from our mistakes and get ready for the next game.”

Connecticut’s fire has propelled them to a 14-9 record going into this week, which ties them with the Washington Mystics for third place in league standings. They’ve become contenders after losing their first four games of the season, and they have played with enough intensity to intimidate opponents. Their most stunning win was in mid-June, when they handed then-undefeated Minnesota their first loss of the season.

The Sun have been notching wins with good old-fashioned team play, as the steady statistical assault from Jones, both Thomas players and Courtney Williams, in particular, has been more than even the best teams can handle. The four rank between 14th and 26th in the league in scoring, and frequently all notch double figures in a game. Each of them are viable candidates for most-improved player, and Jones is the only athlete in the WNBA to average a double-double all season long. She is the league’s current rebounds average leader.

With a solid starting crew, and reliable reserves like Alex Bentley and Shekinna Stricklen, Connecticut’s potential in the playoffs is unlimited.

“We should definitely feel like we could go far,” Williams said.

Both coaches and players say the team’s wins this season stem from confidence that begins in practice.

“We’re very scout-heavy, we prepare hard,” coach Curt Miller said. “We prepare very consistently. It doesn’t matter from one day to the next, we prepare the same way. They buy into it, and it might become a little monotonous for them. But there’s something in the consistency of how we prepare, even if it’s a little boring sometimes. That’s been my philosophy for my almost-30-year coaching career.”

Assistant coach Steve Smith, who was previously an assistant with Miller for the Sparks, said that having confidence breeds more confidence. Williams said that is true for her and her teammates.

“I think we feel like we could beat anybody – Minnesota, LA – it doesn’t matter,” Williams said. “We’re going to come out and compete. We don’t care about anybody’s name.”

Miller, in his second year as Sun coach, is quick to credit the efforts of his players prior to the season for their uptick in performance.

“Jasmine Thomas really put a lot of work individually into her game,” he said. “Jonquel had such a successful season in Korea that she came back with so much confidence.”

But coming into the year, the franchise knew they would be without All-Star forward Chiney Ogwumike, who is still recovering from Achilles surgery. Then in the first week of play, forward Morgan Tuck was injured and missed several games. Connecticut struggled, but they adjusted.

“It’s funny how things happen,” Miller said. “Alyssa Thomas has always been able to play the four, but we’ve been playing her at the three. The unintended consequences of Tuck being injured resulted in (Thomas) changing assignments. As a result, she becomes….one of the most facilitating forwards in the league. It opens everything up on the floor when you have a player that has the package skills that Alyssa has.”

The door was opened for Williams when Bentley had to leave the country for Euroleague play in June. Williams jumped into a starting role and didn’t miss a beat.

But all the shuffling might have contributed to the Sun’s poor start on the year. Miller wasted no time in trying to fix it, and the team and coaching staff sat down to figure out what they were doing wrong.

“I think the big thing was we got in the film room and we were honest with each other,” Miller said. “As a coach you have to take responsibility, and as a coaching staff we looked at what we could do better.”

Miller said coaches vowed to be better in late-game situations, and he had the team change their approach, as well.

“We asked them to look in the mirror at what they could do better late,” he said. “Without a dominant player that you play through all the time, we felt our best approach was to have five people hunting for shots rather than watch one person try to win or lose a close game.”

“All of a sudden we turned that around and we’ve won these close games,” Miller said. “These runs other teams have had in the fourth quarter, we’ve gathered ourselves and held them off.”

“We take everything one possession at a time, one game at a time,” Jones said. “The good thing about basketball is it’s a team sport, so even if you’re not having your best night you have teammates there who can support you.”

Jones said team basketball is what Connecticut is all about.

“We genuinely care about each other and when we get on the court, it shows. We move the ball and play team basketball,” she said. “We’re not that kind of team where we have one member that shoots the ball for us. If you look at our stats, everybody’s moving the ball, everybody’s shooting, everybody’s scoring. Team ball.”

Miller said players are also helped by the fact that the coaching staff has confidence in them.

“It’s fun to have a young team, and we allow them to play,” Miller said. “I’m a big believer in spacing. We have to have philosophies and patterns, but we also have to have belief that our players can play.”

Smith credits Miller for guiding the team into finding a rhythm that works for them.

“Curt Miller has a great basketball mind,” Smith said. “That’s important, because this league is so good and anybody can beat anybody on a given night.”

Miller echoed the same sentiments, and said that is why the Sun won’t get comfortable with their play or their record.

“We found a system that’s working for us right now, but we all know that a 10-day window in this league you can flip so quickly,” Miller said. “You can go from third to tenth in a hurry.”

One of the keys for Connecticut in pushing toward the playoffs is that players have fun on the floor and remember why they first took up basketball.

“Basketball is fun, man!” Williams said with a laugh.

The Sun’s playoff push continues Friday, as they host the surging Phoenix Mercury in what could be a volatile match up. 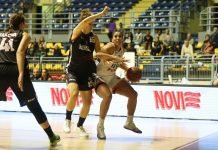 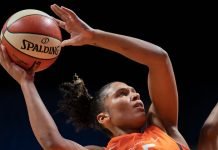