The Thibault name has long been associated with winning in basketball. Now, as Mississippi State enters its first Final Four, the same holds true once again.

First-year Bulldogs assistant coach Carly Thibault was celebrating on-court Monday after the team upended Baylor to win the Oklahoma City Regional final. She held the trophy and got a piece of the net after it had been cut down, much like she has seen her father Mike Thibault do during his storied coaching career. This time, however, the moment was hers.

“It’s been a roller coaster ride this season, Thibault said. “We’ve been all over the country and had so much experience. Everything we’ve gone through prepared us for that moment.”

The win punctuated a season that saw the Bulldogs play a preconference schedule that had them on the road for all but two games, and which included match ups from Los Angeles to Hawaii to Maine. They were ranked as high as No. 3 in the AP top 25 poll at one point, and they didn’t lose a game until a meeting with Southeastern Conference rival South Carolina Jan. 23.

Now, ironically, Mississippi State will face Connecticut in the National semifinals Friday – the same team that drummed them out of last year’s NCAA Tournament and inspired head coach Vic Schaefer to challenge the team with a tough schedule this season. As a coach Schaefer has come to count on, Thibault has spent countless hours this week watching video and helping to prepare the Bulldogs to face the nation’s No. 1 team.

“Carly has really fit in well here with my staff, with our players, with this university. But her work ethic, her attention to detail has really been pleasing for someone, who is, quite frankly, as young as her, not quite had the experience. But, man, she is off the chart. She’s been a home run for me.”

But despite her all-ball surroundings, Mike Thibault said his daughter didn’t necessarily gravitate toward the sport initially.

“She tried a variety of different sports, including gymnastics,” he said. “She didn’t really dedicate herself to basketball until she was a sophomore in high school.”

Thibault attributed her initial reluctance to a bit of rebellion.

“I do share a trait with my dad in being stubborn,” she said with a laugh. “Growing up, for a while I resisted playing basketball because I was stubborn. It was hard to separate the roles my dad had between being a dad and being a coach.”

Mike Thibault gave her some space.

“We decided if I needed some advice I’d go to him, instead of him forcing it on me,” she said.

Thibault played basketball at Monmouth from 2009-2013, where she became the school’s third-leading career three-point shooter. By the time she was ready to graduate, she knew she wanted to get into coaching. She got a job soon after as director of recruiting operations at Florida State, working under coach Sue Semrau.

“She loved it so much,” Mike Thibault said. “Sue was a great influence on her.”

From there Thibault took a job as an assistant coach at Eastern Michigan, where she stayed for two years. When the job opened at Mississippi State, she took a chance. Schaefer did too.

“Carly came highly recommended from a number of people. Anybody that knows me, when I’ve had to replace an assistant, I really take my time. I’m not one to rush into anything,” Schaefer said. “In calling people across the country, from coast-to-coast, her name came up quite a bit.”

“I think if you’re going to be successful at this level, you better surround yourself with really good people. I’m smart enough to know I can’t do it by myself.”

Thibault said her adjustment period was mitigated by having “good people” around her. With the Bulldogs’ high game attendance figures, she has learned to appreciate the small town atmosphere of Starkville.

“Everywhere you go, people know you,” she said.

Thibault said she has learned a lot from Schaefer already.

“He has a great defensive system that’s hard to learn unless you’re in it, so you see how he coaches it and puts it all together,” she said. “He holds his players accountable. He also has a good court-off court balance. He can get on a player in practice, but once practice is over he is a father figure.”

Mike Thibault, whose son Eric has been assistant coach for the Mystics with him since 2013, is pleased to see his second offspring’s coaching success.

“It’s awesome,” he said. “You watch your kids grow up, play and move on to a coaching career and hope they have some fun with it. I watch all of her games, even when I have to record them.”

Thibault said she appreciates the support she’s received from both her father and brother.

“(Mike Thibault) is one of my first phone calls when I need something,” she said.

The best part of the job? That’s easy.

“The best thing is that I get paid to be around basketball all day,” Thibault said.

Mississippi State and Connecticut face off Friday at 8:30 p.m. CT at the Final Four in Dallas. 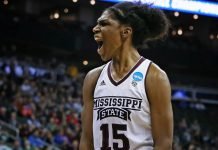 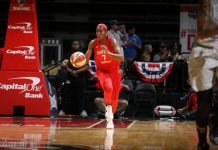 Beavers prove to be too much for depleted Trojans

Big game day has some shockers

Keep those awards in perspective: it’s all about exposure and publicity