On Saturday, Big Sky Champions Montana State (25-6 overall, 15-3 conference) will make their long-awaited return to the NCAA tournament, as they face No. 3 seed Washington in Seattle.

If there was a word to describe the meeting, it would be “coincidental.”

The match up will take place 24 years to the day that the Bobcats last appeared in the Tournament. In what can best be described as a deja vu, Montana State’s opponent in 1993 was none other than the Washington Huskies.

The final score of that game saw the Huskies rout the Bobcats, 80-51, and the odds are certainly stacked against the visitors this time around, as well. This season Washington has possessed one of the highest-octane offenses in the nation, and they will play on their home floor in front of a sellout crowd.

Making it an even greater challenge, and adding to the deja vu feeling, is the Huskies’ average margin of victory this season. Against non-conference opponents, they have won by an average of 31.3 points.

But even if the odds are stacked heavily against them, Montana State will look to an unlikely weapon in senior point guard Margreet Barhoum’s familiarity with some of the Washington players. Barhoum, who hails from just outside Seattle in neighboring Edmonds, grew up playing club ball with Husky guards Kellie Kingma and Heather Corral, and faced starting center Katie Collier as an opponent.

While not as familiar with the players she will be facing, Bobcat freshman forward Madeline Smith is also a Seattle area native who grew up Snohomish, and feels very much at home in the Emerald City.

Having two local products on the roster also means quite a few fans will be in the stands cheering for Montana State, which may ease, even if to the smallest degree, the hostility of the Washington crowd.

None of the players on either roster was born yet when their teams met up the last time, but tomorrow the battle is on to advance to the second round of the NCAA Tournament. The athletes are connected not just by a single game from over two decades ago, but by countless hours together growing up and competing as both teammates and opponents in the Seattle area.

The stakes will be just as high Saturday as they were before, but the story will be even more intriguing. 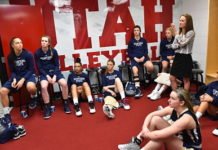 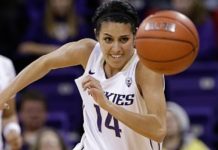 Game 1 had the best ratings in six years