Home College Does a really lousy half of basketball show that UConn is vulnerable?...

Seeking win 97 in a row, playing at their campus home for the first time in weeks, Connecticut gave hope to the world of basketball by playing very poorly for an entire half on Sunday. The high-scoring Huskies missed numerous layups and free throws, were hopeless from downtown, and generally looked out of sorts against a Tulsa team they beat by 40 on the road just twenty days ago.

So, what’s up? Maybe nothing, except confirmation that every team has bad days, and everyone can hope they catch UConn on one of those. An unusually uncritical coach Geno Auriemma, however, did not seem very concerned, at least today.

“You get so used to shots going in, you forget that sometimes it doesn’t,” he said. “As a coach, you have to decide, are we taking bad shots, so we need to get better shots, or are we getting wide-open shots and they’re just not going in? In that case, there’s nothing you can do except go ‘Okay, let’s go to the one guy that’s making shots.’

“I don’t think I’d trade any of the shots that we took in the first half. There may have been a couple that were like ‘Eh?’ But most of them were the same shots we’ve been taking all year, and they just didn’t go.”

“It’s just that we make so many. You know, a lot of teams, this is part of their daily routine. They’ll have a lot of spells like we had today.  But because we don’t have many. . . .”

As Auriemma acknowledged, every team has bad shooting days, but our expectation of UConn is that they are the exception to the bad-shooting-day rule, as they are to so many other “rules” of basketball. That perception is obviously inaccurate, however, as shown by the second half against Temple last week (in which they were out-scored), and this worst-of-the-year performance for a half, in which they were not.

Katie Lou Samuelson, one of the best outside shooters in the game, was 0-6 from beyond the arc, and continued both to shoot and to miss throughout. She scored six points on 3-14 shooting in the first half. Gabby Williams, whose outstanding play has thrust herself into the national spotlight for All-American consideration, was so unfocused that Auriemma sat her for the entire second period. Samuelson ended her day 8-20 from the floor, 0-7 on threes, and missed her only free throw. This was probably her worst shooting day of the season.

The Huskies, however, are a team that picks each other up. Despite the team’s general poor shooting, Napheesa Collier had 17 points and eight boards in the half to keep them out front. She was “the guy making shots.”

UConn shot just 41 percent for the half, 16 percent from three-point range. This was just shooting futility, not great Tulsa defense. Against a ranked team, they would have put themselves in a big hole. And that, of course, is what every opponent is hoping will happen when they have to face the Huskies.

That said, UConn teams have historically risen to the level of the competition, and this team certainly has done so against ranked opponents this season. Why is all this relevant? Because a dynamic No. 5 South Carolina team comes to Storrs on Feb. 13, hoping to stop the Huskies from consecutive win number 100. That game, as has been frequently noted, is likely the last chance for anyone to beat UConn before the Elite Eight.

It is also noteworthy that the Huskies have not had two bad halves in a row until now, since the first game of the season against Florida State. And UConn certainly snapped out of it in the second half.

Auriemma, smiling, said “Did you notice how they all started going in, in the second half?”

The Huskies shot 73 percent in the second half, 60 percent from beyond the arc. With that contrasting performance, UConn cruised to win number 97 in a row, 96-50.

So does it even mean anything? Maybe not. But if the Huskies win it all once again, this very talented team needs all the parts in sync. For long stretches in the last few games, one or more players has not been there.

Understand that anyone covering this team, as I have for years, is always looking to highlight the relatively rare flaws in this dynasty. This particular flaw, however, is real. Although the bench is improving, the starters carry the weight. More than most past UConn squads, this one needs each of their interchangeable parts to contribute every game against top competition.

There is good news for the Huskies in recent contests, however. Saniya Chong’s growing confidence adds a new dimension to the team. She is looking for her shot, and making a lot of them. She leads the nation in assist/turnover ratio. (1:4.26, 81 assists, 19 turnovers). Against Tulsa she was 5-10 overall, 3-6 from beyond the arc, and perfect from the free throw line for 17 points. She added seven assists without a turnover in 36 minutes. Chong is also is a vastly improved defender over the last month, and now fits smoothly into the athletic, stifling, switch-on-every-screen defense that has stymied so many good teams.

The second good news is that the bench is developing, with Crystal Dangerfield providing good minutes (and astonishing court vision) at point, and Natalie Butler increasingly effective in the paint.

All in all, a pretty ugly twenty minutes may be forgotten as UConn moves on through the rest of the schedule and into the post-season as the favorite to win it all. But at least Husky opponents can hope for a day like Sunday. 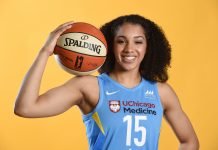 The NY Times writes about someone other than Candace Parker