Matt Insell is in his fourth year as head coach at the University of Mississippi. In his second season, he guided the Rebels to 19 wins – the most in five years. In 2015-2016, Ole Miss notched 26 wins and knocked off a ranked opponent for the third time during his tenure. So far this season, the Rebels are 12-4 overall.

Insell was head coach of the prestigious Tennessee Flight club ball program from from 2001-2007 before serving as director of basketball operations at Louisiana Tech in 2007-2008. From 2008-2013, Insell was assistant coach to Matthew Mitchell at the University of Kentucky. During that time, the Wildcats had four 20-win seasons and advanced to the NCAA Tournament each of those years.

The son of 40-year coach Rick Insell of Middle Tennessee, Insell coached against his father each of the past two seasons. He went to the University of Tennessee at Knoxville, where he was a student assistant for both women’s and men’s basketball. He transferred to Middle Tennessee, where he graduated in 2007.

With Rick Insell for a father, was there any chance you wouldn’t be a coach?

It’s interesting because I didn’t live a typical life of a kid growing up. When school got out at 2:30 every day, I got on the bus and I’d be at the gym with him and his team until five or six at night. All my friends would be playing while I was doing my school work, and then he’d make me do form shooting. It all got started with my grandmother – my dad’s mom. She’s 86 years old and still watches every NBA game, and any other game that’s on. She played herself when there were not a lot of opportunities for females. She just loved the game. My mother’s sister was also a really good player. Basketball is what we’re all about in our family. Every holiday, we do activities that have something to do with basketball.

This past holiday break we had to cut meal short so my grandmother could get home and watch a game. My family doesn’t miss watching every single one of my dad’s and my games. My grandmother talks to me after every game and critiques everything we do. I have to relive the game through her eyes.

What did you learn as a student assistant at Tennessee? What did Pat Summitt teach you?

At the time, women’s basketball was still a high-low game, and I wanted to learn a more open system – how to spread the floor and make plays. Dad said men’s college ball was 10 years ahead of women’s, and I wanted to see why.

I got out of high school and Pat offered me a job, but Buzz Peterson got the job on the men’s side. So I worked for him, but the Lady Vols practiced at 12:30 every day, so I arranged my schedule so I could eat lunch and watch and take notes. One day I missed and I saw Pat later in the hallway, and she said, “where were you?” She was so special.

Did you ever want to coach men?

In what ways did you grow as an assistant at Kentucky?

I got asked if I got hired to bring players to Kentucky due to my time with the Tennessee Flight. Matthew told me he was hiring me because I was a good coach. The biggest thing Matthew did was to help me with consistency: being consistent in daily life, consistent in how you live your life out of the office, and on the court. He’s someone who’s meant a lot to my professional growth. When the time was right for me to get a head coaching job he told me: you’re ready. I follow Kentucky and have a lot of pride in that place.

Being a head coach at an SEC school comes with a lot of pressure. How do you handle that?

It’s a pressure-packed job, especially taking over the program when we did. I was blessed with having an athletic director that understood where our program was at, who wasn’t saying “you got to do it in the first couple of years. I’m fortunate that he’s had my back, and I credit him for being patient and letting it happen. In the SEC everyone wants to win now, and it’s tempting to cut corners and get players who don’t fit what you do to help you win it for one year. The pressure is in sustaining your course and not doing something dramatic. When you step on the court, you’ve got to coach against Holly, Gary and everyone else, so I have to bring my A game, just like I tell my players they have to do. If I make one mistake, the coaches in this league make me pay for it. They expose you.

I live my life in SEC play with a short-term memory. When the game is over I enjoy it tonight, but I don’t talk about it tomorrow. Anybody can beat anybody in this league.

What are your keys to building a successful program?

I talk to our team a lot about passion, poise and purpose. We have to be passionate about what we’re doing at every game, and that’s shown both in how you play offense and defense, and in the classroom. I send a group text every morning with what their passion will be every day. For poise, if I’m not helping them grow socially, we’re not doing our job. Academically, I make sure they achieve excellence in the classroom. To play at our level, you have to have a pro mindset. Our purpose is to be real tough, no matter what we’re doing.

What is the best way to motivate players?

If they know you care about them off the court, they’ll go hard for you on the court. People ask me, “how do you get them to play so hard for you?” I say, it’s not a drill – they know I care. If you’ve got a date, you better bring him by. I’m only a phone call away. If I’m in a meeting and a player calls, I answer right away, no matter who I’m talking with.

You’re a relatively young coach. Do you feel like you’re in the middle of the old schoolers like your father, and the young people themselves?

I’ve always surrounded myself with older people like my dad, and their advice has given me maturity. You’ve got to be older than your age. I try to keep people around me that are  honest with me. My former high school coach and I talk a bit. There are great high school coaches in Tennessee that I talk to every single day. A lot of times coaches get caught up correcting players and don’t correct themselves.

You’ve coached against your dad a couple times. What is that experience like?

It’s not been fun because I haven’t beat him. He’s very hard to coach against, because he knows the game so well and he’s really good at preparing his team for different opponents. He’s good at getting teams to buy into a philosophy. I told him, if I had my team try to do what you had them do, they’d tell me I was crazy. When you make an adjustment, he makes an adjustment back at you. We didn’t play each other this year because we decided people don’t really respect the game. His fan base and our fan base didn’t feel like the game was getting respected. It was dad versus son rather than school versus school.

What are your short-term and long-term goals as a coach?

Short-term, to build a program; long-term, to win a national title. I believe it comes with a lot of hard work. I study a lot of coaches on their paths to doing that, and I tell players that you can’t get so fixated on the end that you lose what’s in between. Geno didn’t just start dominating in Connecticut; it took time. I want to do it here at Ole Miss. We have a good program and we can do special things.

What’s on your music playlist?

It varies. Right now I’m big on Chris Janson, a country music singer who’s new. The reason is because he’s got some Old Miss ties, and he keeps up with our team. I like all types of music, but I try to keep up with our recruits, so lately I’ve been listening to a guy named Meek Mill. 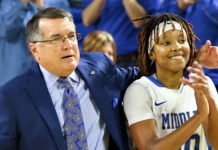