What a dominating performance by the Oregon Ducks, from buzzer to buzzer. They took down #24 Michigan State, 88-55.

#1 Notre Dame soundly defeated Lafayette, 91-51, in a delayed effort. The game was at Campbell Center in Houston when the power went out in the second quarter. After waiting for over an hour, the contest was moved to nearby Rice University without fans, as security couldn’t be guaranteed.

I’ve not heard of such a scenario before.

#15 Washington’s 105-53 rout of Idaho saw not only Kelsey Plum score 27 points (her usual average), but Chantel Osahor got the first triple-double in school history for the Huskies.

North Texas 62, Arizona 58…..it was the first loss of the season for the Wildcats.

Virginia Tech 71, Charleston 61, and the Hokies are undefeated under first-year coach Kenny Brooks.

Delaware 66, Princeton 62….the Tigers are struggling this season.

Virginia is placing an emphasis on defense and rebounding.

A year later than expected, Asia Durr is getting it done for Louisville.

Muffet McGraw likes the direction in which Notre Dame is heading.

Skylar Diggins’ road back to the Wings.

Q&A with the Liberty’s Kiah Stokes.

Brittany Boyd’s strong finish provides a glimpse of the future for New York. 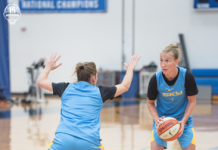 The biggest “Big Monday’ in a while

Dallas pulls through in back-and-forth battle with Seattle

Lady Vols in the news