After the 2015 WNBA season, I laid out an eight-point plan to better market the league, which included better fan outreach and involvement, education and publicity about players and teams, and better responsiveness from league representatives.

The season this year saw more proactive measures from the WNBA to garner press coverage, and numerous celebrity endorsements to bump TV ratings. But while these are steps in the right direction, there are still more measures that the league needs to undertake if they want the WNBA to grow.

Publicize the publicity that the WNBA gets.

The league organized phone press conferences for media with players before every major match up last summer, as a way to generate coverage. It worked, too, as more copy was produced from a variety of sources. The problem was and is that very few of these stories end up on the WNBA’s twitter feed, in their public discussions or in team press clippings. The league still needs to do a better job of publicizing their own publicity. They get a good amount from some very skilled and caring writers. If they acknowledged that work, they’d not only help spread the word about the league, but they’d undoubtedly receive even more coverage.

The WNBA and all team media relations directors should be proactive and responsive.

Response time to media emails and other requests for interviews, information, photos, etc., needs to be shortened. Media relations directors should ensure that players are available pre- and post-game for interviews. All team twitter feeds should be updated daily, at a bare minimum.

As the WNBA needs to continue to increase public awareness, there is no reason team representatives in each city shouldn’t be at every college, high school and club ball game throughout the year to promote their team. A booth at a summer tournament would reach thousands of players and coaches and would get kids to games. Aligning with high school or college teams in the winter could get groups to match ups in the summer, which would yield numerous social media posts and increase awareness.

Young people are more supportive of women in sports than any other group. Court them. Girls are in need of strong role models like never before. Show them all they have to look up to in WNBA players. Mentoring programs would probably be a huge success, but no team has tried that yet.

League MVP Nneka Ogwumike made reference in a recent interview to the fact that WNBA fans have a special love for players and “know them all quite well.” If teams hosted more fan events, as they did in earlier years, this love would grow and spread.

A little goes a long way. Witness Tamika Catchings’ “Legacy Tour” last summer. The retiring Indiana Fever star drew crowds in each city she visited because fans across the country had watched her play for 15 years, and they loved her. This translated into donations for Catchings’ non-profit organization. Done regularly, it could translate into ticket sales for teams.

Enlist the help of fans in each WNBA city to help with marketing.

Fans in each city know best how to market to their own unique communities. I have heard some amazing ideas floated through the years that far surpassed those of the franchise. Form a fan committee in each city to regularly brainstorm outreach and publicity campaigns for their teams. Not only will they have amazing ideas, they likely will have connections to make them happen, too.

Promotion for the NBA begins the day after the Championship game. The WNBA needs to do the same. There is no D-league, as most players go overseas to earn extra money. But there are plenty who stay home. Teams should have them make appearances and play exhibition games regularly to keep the WNBA in the minds of the public. This is not a six-month publicity commitment: it’s a 12-month gig.

The WNBA got the support of NBA players this year. If they now take it to the fans – the grassroots and bread and butter of their organization – their next 20 years will far surpass their first 20. 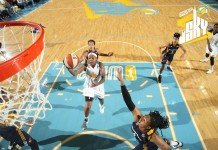 Marketing the WNBA? Here’s a plan

This week’s schedule for The League

News from all corners

The rest of the story