Rick Insell has coached the Middle Tennessee Blue Raiders since 2005. Since his arrival, he has lead MTSU to nine NCAA Tournament appearances and two WNITs, and he has coached five All-Americans and grown four WNBA draft picks. He is one of five Division I coaches to average 25 wins per season with at least 10 years of coaching experience.

Insell graduated from Middle Tennessee in 1977, and shortly thereafter began coaching at nearby Shelbyville Central High School. During his long tenure there, he guided the Golden Eaglettes to 10 state titles, two national high school titles, and his career winning percentage was 84 percent. He also won three AAU national championships.

With wife Deborah, Insell has three sons. The youngest, Matt, is the head coach at Ole Miss.

I don’t know any other Division I coach who spent 28 years as a high school coach before coming to the college ranks, much less one who has been so successful at both levels. Let’s start at the beginning: how did you get into high school coaching?

I was a junior high boy’s basketball coach when the job came up at Shelbyville High School for an assistant men’s coach. I interviewed and they told me, “We like you, but there’s one catch: you’ve got to coach the girls.” At that time I didn’t like women’s basketball, because it was a six-on-six game then. But I was broke and I had a wife and a little kid and I had to have a job, so I took it. After one year I decided that this is what I wanted to do. I went to the school administration and told them I’d stay with the girls, that I really wanted to do this. So I taught American history. That got me in the mainstream with the academics, too. To them I wasn’t a coach; I was an American history teacher.

Other than winning and breaking records, what else inspired you to remain in high school coaching for so long? What is it about that age group that is fun to work with?

I had the best high school program in the country. Along with that i was involved in AAU, and the two ran hand in hand. I got some publicity in the summer, and then I got a lot of publicity with our high school program. I was fortunate that in the early 80’s I was one of the first high school coaches to be chosen by Nike to be one of their programs, and that gave me some credibility. I had the best of both worlds, and that prepared me to coach at the collegiate level.

I had club ball after March and ran it until July, and then I’d take the month of August off before jumping back into high school season. I loved it, absolutely loved it, and I brought my sons into that.

What are the differences in coaching the two levels?

In high school I did it all: promoting, sweeping floors, concessions, travel. It was tough starting here because so many people’s livelihood depends on how we do. Operations, strength and conditioning coaches, assistant coaches. I had to learn I couldn’t do it all; they had to do their jobs. The key is to get good players and also get good assistant coaches that buy into your philosophy.

How have you changed as a coach since taking the helm of the Blue Raiders program?

You’ve got to change. Athletes change and social media is making all of us change. If you don’t change it’ll be a negative, and if you do it’s a positive. Being an old guy it’s tough, but I’ve got some good young coaches that are hooked in with the new generation-type athletes. We meet every day and they tutor me in what I need to do and how I need to go forward.

When MTSU guard Tina Stewart was killed by her roommate in 2011, what did you do to help your players, the program and yourself deal with that loss?

It was the toughest thing I’ve been through. There’s not a day that goes by that I don’t think about it. An incident like that makes you aware of what’s going on around you, in the dorm rooms, in the apartments, and with people outside. It was a terrible situation for all of our coaches,  myself and people around the conference. This isn’t the only isolated such incident that’s taken place in the country. We’ve had to grow from it, and we still talk about it. We have a picture of Tina on the wall that they see every day.

We’re in a changing world; you’ve got to be coaching them on X’s and O’s, but also about life.

The foundation is you want to win and want to be successful. That takes preparation and attitude, and attitude is just about everything. If you go into a classroom you have to want to learn. If you go into the weight room and go through the motions, you won’t get stronger, but if you invest you will. If you come into practice and invest then we’re going to have a better basketball team.

How do you, personally, stay motivated?

When you’re 65, you’re excited when you get up. I’m intense, motivated, and I love this time of year. When I come up the ramp on to the court, I’m ready to rock and roll.

How did your son Matt get into coaching? Are you able to talk during the season?

He really disappointed his mother and me, because he was a great player and would have been a great college player. But he told us he want to be a manager and wanted to go to Tennessee and be a manager for men’s coach Jerry Green and not for Pat, who was a close friend of mine. Jerry said he could come on board, but then Jerry got fired and they hired Buzz Peterson as coach. So they hired Matt again and he got to do all the jobs as manager that get no appreciation.

Matt and I have already talked about five times this morning.

Everyone you touch bases with you’ve got to know, as those are those who you go to for jobs. Matt was one of the coaches for my travel team in Shelbyville, and then he was fortunate to get at Louisiana Tech in basketball operations. Then Matthew Mitchell had a spot on his staff for an assistant coach, and I convinced him to give Matt an interview. He got the job, and spent five years there.

What do you want your legacy to be?

I don’t even like thinking about it. But I’d hope it would be that I was fair, that I was a competitor. That if you look at our schedule, we played toughest schedules. I take pride in that.

What does Coach Rick do for fun?

I spend time with my friends. I love the horse business, and I’m on the board of the walking horses industry. I love going out to the racetracks, watching the races and having fun there. The most important thing in life is my family, and after that, my friends. I would give them anything I’ve got. I’m proud of that, that I’m loyal to my friends. 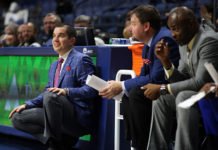 Dream beat Sparks in the battle of the #2 seeds