Los Angeles, Calif. – In the end, it wasn’t the final score that mattered. What was important was the reunion of two basketball legends – this time as coaches.

The Trojans, stacked with veterans and high-impact newcomers, easily handled the Division II Golden Eagles, 85-39, in front of several alumni who played with one or both of their coaches. It was about what was expected from Cooper-Dyke, who guided her team to the Pac-12 Tournament title in her first year as coach in 2014, and Miller, who took over the beleaguered Golden Eagle program six months ago. But the game meant a lot to all present.

“I hadn’t seen her in years, and it was great to get the family back together,” Cooper-Dyke said. “It’s brought back fond memories.”

Miller spent many years in television broadcasting before beginning her college coaching career at Langston University. Returning to her hometown for the first time in many years has made both her and her friends happy.

Melissa Ward, who played with both women from 1982-1986, sat courtside with other former Trojans during the game. At halftime, they called Miller over for a group photo. Ward said when USC won the conference tournament two years ago, she and other alumni were texting and calling each other frantically.

“It’s amazing to see them both here now,” she said during a timeout at Friday’s match up.

After the game, Cooper-Dyke said it is only a matter of time before Miller starts producing results at CSULA.

“She will go far in her job,” Cooper-Dyke said. “It’s only a matter of time before they get to the level of intensity and to the perfection that she expects.”

“I’ll go on record as saying that Cheryl Miller is the greatest female basketball player of all time,” she said.

Outside of the historic moment, the game gave USC fans a glimpse of what is to come from a roster featuring mostly upperclasswomen and newcomers.

Cooper-Dyke attributed the team’s slow first half to first-game jitters, but said everyone “picked themselves back up in the second half” and executed the game plan.

“The freshmen started off nervous and tentative,” she said. “But they are exactly where we wanted them to be. Sometimes in practice, they surprise us. We are excited to have them and to see them grow.”

Simon said having five freshmen on the squad has inspired her to raise her own performance level.

“I try to make sure I do everything right, to be a role model and to be the best player for the team,” she said.

Miller was her usual animated self on the sidelines during the game, dishing out encouragement and correction as situations warranted. Afterward, she was calm.

“We have a lot of work to do,” she said of the Golden Eagles.

USC’s season opener, against Hawaii, is Friday at Galen Center. 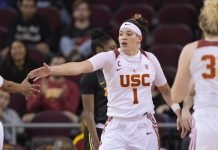 Jordan Adams back at USC to finish what she started 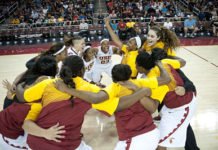 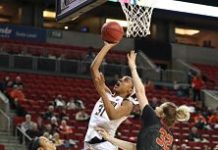 Pac 12 Tournament day one: no upsets, but star performances

And on the seventh day, the WNBA rested

Practices have begun for some college teams

More tourneys, and WNBA gearing up