It is well-known that the number of collegiate female coaches has been declining steadily for decades. What isn’t as known is that a lack of women coaches prevails even more so in the high school girls club basketball ranks.

As the summer recruiting period comes to a close this month, thousands of players on hundreds of teams around the country will jockey for the attention of college coaches, in pursuit of basketball scholarships. But only a handful of those teams are coached by women.

Kimberly Davis-Powell has run Essence Girls Basketball in Tallahassee, Florida since she founded it in 1997, while still in college. It has since become one of the country’s premiere club ball programs.

Davis-Powell said she doesn’t necessarily seek out women to coach her teams, but finds that many Essence alumni return to take those roles. She said many women don’t go into coaching due to lack of support from male partners.

Davis-Powell formed her viewpoint from her own experience.

“When my husband and I went on our first date, the one thing he told me was that he was in the gym late a lot and he doesn’t want anyone he is dating to get jealous,” Davis-Powell said. “I said, ‘good!’ because I need the exact same thing. I left my first husband because he got jealous of me spending so much time with my girls.”

Boo Williams, who has run both girls and boys club basketball programs for decades, agreed there are more barriers for female coaches.

“We do need to get more women involved, but there are so many more things they have to deal with now – careers/family balance, longer playing careers for those who played,” he said. “The key, I believe, is getting more women involved in administration and coaching.”

Lisa Griffith, director of Portland, Oregon-based Fast Basketball Academy, is a newcomer to the scene, but like Essence is a Nike GEYBL-affiliated organization. When attending her first Nike meeting, Griffith noticed there were only three women in the room, including herself. She asked Davis-Powell why that was.

“It’s crazy to me now that I’m in this role as GEYBL director to see so many men,” Griffith said. “Apparently women are not being actively recruited to (coach at this level). I pick up the phone and call every woman I’ve coached or played with to see if they’ll help.”

Griffith began Fast Basketball four years ago after watching a national tournament in July and being underwhelmed at both player skill levels and the coaches involved. She said she watched 30 games during the tournament, and only two of them featured fundamentally-sound players and good coaches.

“I decided I could do something about it, or I could complain,” Griffith said. “I told my brother-in-law, who ran Fast Basketball boys academy, that I wanted to start a girls Fast. He had been doing a fantastic job building a program of fundamentally-skilled players, and nobody was focusing on the girls. That’s where it began.”

Fast has teams for ages 10 and under, up to 17 years old. Especially with younger players, the focus of the academy is on skill development.

“Boys can get away with (not having as much skill emphasis) a little more than girls, as they tend to have the the ball in their hands a little bit earlier,” Griffith said. “We have skill development before practice then footwork, then performance training.”

Griffith said it’s important to her to bring in female coaches, because girls need those role models.

“If you don’t make a point to bring in diverse candidates, you’re not picking up the phone,” she said. “Anyone who says there aren’t enough candidates are full of crap. I’m not saying give the job to them because they’re a woman, but there are a lot of qualified women out there.”

“Unless women stand up and form their own club or hire women coaches, things won’t change,” she said. “We can bitch and moan all we want, but do something to change it. At the club level there is less of a barrier than there is at the college level.”

Another female heavyweight girls club ball director is Kara Leary of the New England Crusaders – a New Hampshire-based Nike GEYBL team. The Crusaders began as a one-team club many years ago, and now has 8-12 teams each year. They practice year-round, and conduct winter clinics for young girls. Sundays are skills development days for high school players.

“We’ve become somewhat of a breeding ground for kids who want to go on and play in college,” Leary said. “We’re only as successful as our coaches and kids. We’ve had a lot of successful kids willing to come back and coach.”

Those coaches include Lauren Moore from Bentley College, Kim Benzen from Holy Cross and Lauren Brown from Skidmore College, who each coach high school basketball, too. Leary said she always follows her players after they leave her program. Men also coach for the Crusaders.

“We do have some very good male coaches,” Leary said. “We make an effort to involve female coaches if possible.”

Leary, who played under Muffet McGraw at Notre Dame, said her expectations of her coaching staff are high, whether they’re men or women. But she does recognize the barriers for females in sport.

“If you’re good, you should have a job,” Leary said. “But the access isn’t the same.” 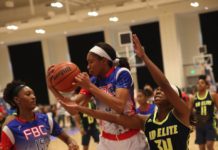 Notre Dame to the ACC