High school club basketball in July resembles the March Madness of college ball: teams playing a lot of games in a few amount of days with a singular “survive and advance” mentality.

Besides getting exposure for athletes, the goal for teams at the end of this final college recruitment period of the year is to win a national championship. The NCAA-mandated dead period began Wednesday, and lasts through July 22. The last few days of the month will be the grand finales: Nike Nationals and Adidas Nationals.

It is a calculated end to a three-step process that begins in April. But the structure is still a new playing field, as club ball used to be more freewheeling.

The Nike Nationals Tournament is the crown jewel for many club ball teams, as it serves as an unofficial national high school championship. The winning team gets bragging rights for a year, and usually sees increased interest from athletes.

The road begins in April, on the first recruiting weekend of the year, with the Boo Williams Invitational in Virginia. Thirty-two Nike-sponsored teams in four divisions strive to accumulate the best record by mid-July, as six teams in each of four divisions get to play at Nationals.

To begin the month, two divisions head to the Battle of the Boro – this year in Louisville – while teams in the other two divisions face off at the Nike Tournament of Champions in Chicago. Play concluded in both tournaments July 12, setting the field of 24 for Nationals, July 27-30 in North Augusta, South Carolina.

This summer is the fourth year of Nike Nationals. Before then, club ball teams headed to various tournaments around the country to showcase athletes. But as in business around the United States, where large companies have taken over small ones, the two major national tournaments have made the smaller ones largely obsolete.

A spokesman for Nike said the company’s goal in beginning the tournament was “to improve the summer game by making those games more meaningful and competitive.”

There is also a Nike National Title competition for the 15-and-under set, where 16 of 32 teams qualify for the culminating tournament.

The new kid on the block is Adidas, which entered the national tournament scene last year with its 38 sponsored teams. They also begin with a spring tournament for teams to build their records, called the Gauntlet Series, which is split between Indianapolis and Phoenix. The Gauntlet Finale tournament was this past week. The culminating summer event is Adidas Nationals next week in Atlanta.

“We have a national elite 38, but we also have a second group of teams because we wanted to get more kids involved,” he said. “Every team in the Gauntlet Club is provided with a custom uniform with a logo.”

“We realize we’re chasing Nike, but we’re trying to create an environment where kids feel a part, and not left out,” he said. 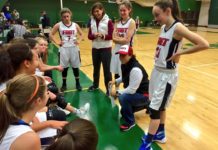 This news load is bananas

Trinity Valley, North Idaho to face off for NJCAA Division I...

The fireworks of August