Home College The solution for unfairness: going forth in giving

In May, Rolling Stone magazine put out a special Prince collector’s edition in honor of the late musician, who died the previous month. In the introductory essay, Rob Sheffield wrote:

“The news of his death, at just 57, was truly heartbreaking because he seemed built to thrive into his golden years, an artist we all expected to remain prolific and independent and stubborn and gloriously himself for years to come. We all deserved a chance to hear Old Man Prince. This is what it sounds like when doves cry.”

The morning Pat Summitt died two weeks ago, I thought of that paragraph, and how every word of it applies to her, too.

The coaching legend was a mere 64 years and two weeks old when she passed. And if there was ever a person that seemed built to set her golden years on fire, it was Patricia Sue Head Summitt.

No one – myself included – could imagine her retiring, much less passing away. She couldn’t either. Known for moving fast and never staying still, Pat said once she didn’t know what she’d do if she ever retired. If someone, somehow, convinced her to do so, the vision of her sitting in a special seat at Lady Vol games, gleaming, came to mind. She certainly deserved royalty status for all she’s done for women’s basketball.

Pat was so strong in all ways that it was easy to see her still swatting raccoons, playing round after round of golf, or speeding down the road with some gray hair flying in the breeze into her 80’s and 90’s. In fact, it seemed a given.

We deserved to see her enjoy life, to rest on her laurels just a little bit. We deserved to read what other wisdom might flow from her in future books. Her athletes deserved more years of her, and to enjoy an evolving relationship, as UCLA coaching great John Wooden had with former player Kareem Abdul Jabbar.

Instead, Pat was ripped from us. Right in the middle of her brilliant coaching career; chasing titles; and pushing, inspiring and loving more players, she abruptly retired. And the sport and its coaches and fans, in particular, haven’t stopped missing her since.

Then, she died from Alzheimer’s Disease less than five years after announcing she had it. It is shocking, to say the very least.

Today’s Celebration of Life service for Pat was beautifully-done, and much-needed for closure, to begin healing. What Pat would want, of course, is that there be “no pity party.” I think she would also approve of this suggestion: donate to the Pat Summitt Foundation, which not only funds research to end Alzheimer’s, but helps those who already have it.

We can’t recapture what we have lost, which is tremendous, but we can carry her spirit forward by giving. It’s the Pat Summitt way. 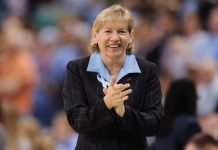 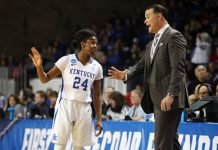 As we begin week five of the season………….

Coach Marianne Stanley in the spotlight