Home Features From LJ and Sue to Jewell and Stew — Seattle transitions from...

No matter where you go, you can’t escape the comparisons.

The parallel of back-to-back No. 1 selections is too obvious to not link the successes of Lauren Jackson and Sue Bird to the potential of the new duo of Jewell Loyd and Breanna Stewart.

And indeed, the foundation for the Storm has been laid with those two picks, along with Japanese national Ramu Tokashiki, and even 2015’s No. 3 pick, Kaleena Mosqueda-Lewis.

But with Sue Bird continuing to provide a steadying hand as the team’s longest-tenured veteran, and the likes of veteran forwards Crystal Langhorne and Alysha Clark expected to play significant minutes, it’s fair to say that Seattle is a team in transition.

After a 30-point season opening loss to the Sparks, the Storm were already faced with a big test in how they would respond to the blowout against a team they swept in four match ups last year.

And respond they did, erasing a seven-point deficit with less than four minutes to go against the Mercury Friday night, as Loyd hit the game-winning jumper with seconds left to seal an 81-80 victory.

With the team tipping-off its home slate this Sunday against defending champion Minnesota at Key Arena, here’s a look at the Storm roster, and what we’ve learned in the first two games.

Sue Bird — The 35-year-old legend may be in the twilight of her career, but that doesn’t mean she isn’t expected to be a key contributor on this year’s team. Like last season, there’s a good chance Bird will sit out several games to rest, while her playing time is closely monitored to make the most of her minutes.

But as was the case last year, she’ll be leaned on to be the steadying presence on a young roster. Bird is known for her clutch plays in tight game situations.

Jewell Loyd — After a Rookie of the Year-worthy 2015, as the lone first-year player to finish in the top-five in scoring, rebounding, and assists among her peers, the Notre Dame product is already turning heads in her sophomore campaign. Her 30-point performance against Phoenix set a new career high, and that outing included the Storm’s final 10 points.

“I’m seeing the floor and seeing the plays differently as I did last year playing the two, but as a whole I think I understand the offense a lot better, and the defensive principles that we learned since day one a lot better as well,” she said on media day.

Monica Wright — The longtime Minnesota Lynx sixth woman said during training camp that she was back to 100 percent after knee surgery last season, but head coach Jenny Boucek may be taking a more cautious approach to her return. She played just seven minutes in the season opener, and sat out against Phoenix.

During training camp, the guard said she has no issue with taking on a mentoring role for the team’s young talent.

“It’s been good to have such young talent around, and it’s been fun to watch them do their thing,” Wright said.

Now, the question seems to be just how much of that mentoring she’ll be doing on the court.

Blake Dietrick — The Princeton grad won the final spot on the roster, beating out last year’s backup point guard, Angel Goodrich, draft pick Lexi Eaton Rydalch, and former Phoenix guard Tiffany Bias. However, she has yet to see the court this season, and with Loyd playing more at the point, there likely isn’t the need for Dietrick to play as many minutes as Goodrich did in the same role last year.

“I think last year I had a little bit of a confidence problem,” Dietrick said. “I didn’t know if I, coming from an Ivy League school … if I could really compete at this level, and I think questioning myself kind of made everybody else question me as well, but this year I know I can compete here and can play at this level.”

Abby Bishop — For a time, it was unclear whether Bishop would even see the court during the WNBA season, after multiple blood clots were discovered in her arms back in April, the result of medication she was taking for a hamstring injury. At that time, reports said she would be unable to take part in full-contact training sessions for three months, but just weeks later, she was in Storm camp.

Against Los Angeles, she racked up as many fouls (5) in 15 minutes of action as she did rebounds, points, and assists combined, and did not play against Phoenix.

Alysha Clark — Clark was tasked with a bigger role than ever before last season, posting career-highs in minutes, points, rebounds, and assists, and again she’s in the starting lineup and expected to be a major contributor.

Her defensive efforts won’t show up in the stat line, but in the past it has been the 28-year old’s calling card. Whether she’s able to shoulder an increased scoring load will likely go a long way toward determining the team’s fortunes, especially on nights when Loyd or Stewart struggle.

Crystal Langhorne — With a new post player in the rotation, Langhorne, who led the team in both scoring and rebounding in 2014 and 2015, won’t be counted on quite that much in the lineup. And in the first two games, Stewart had more points and rebounds than her veteran counterpart.

But by taking some of the attention away from the 6-foot-2 former All-Star, it may open up opportunities for Langhorne to work a bit more away from the basket, and make better use of the scoring touch that made her a standout in D.C.

Kaleena Mosqueda-Lewis — After sitting for long stretches of 2015, last year’s No. 3 pick has gotten substantial minutes in the first two games as the first player off the bench. The hope is that she can provide an extra scoring punch, especially from outside, and she might bring something special to the table as a former teammate of Stewart’s at UConn.

But on such a forward-heavy roster, it will be interesting to watch if KML holds that sixth-player role, or if Boucek adjusts her role as the rest of the team familiarizes itself with the No. 1 pick.

Jenna O’Hea — The Aussie missed all of training camp, and the team’s first two games after winning a championship in France, and it’s unclear what role she’ll play this season for the Storm.

Last season, she averaged more than 20 minutes a night while posting career-high averages in points, assists, and defensive rebounds. Toward the end of last year, her game had adapted to rely less on the outside shot, and more on driving to the basket.

Breanna Stewart — The season-opener gave the four-time national player of the year an experience she’s rarely felt: a loss.

But in her first two games, she’s done a bit of everything, leading the Storm in scoring against the Sparks with 23 points (on 9-of-13 shooting), while notching a double-double with 14 points and 13 rebounds in Phoenix.

Stewart’s also trying to make the most of the attention both she and the league are getting as she makes the transition to the pros.

“I’m doing my best to embrace it. This is a huge opportunity for me, the Seattle Storm, the WNBA, and just making sure we take it and go in a positive direction,” she said.

Ramu Tokashiki — The All-Rookie Team selection is 0-for-6 from the field in the early going, and struggled with foul trouble against the Mercury.

However, she did provide a surprisingly strong presence on the defensive glass in the season opener (with nearly 40 percent of Seattle’s defensive rebounds). As she enters her second season in the league, she’s already shown flashes as both a scorer and rebounder, but it remains to be seen whether she can put it all together on a consistent basis.

Another looming question is how much time Tokashiki may miss in the run-up to the Olympics, after leading Japan to a berth in the FIBA Asia Women’s Championship last year.

Markeisha Gatling — The 2014 first-round pick by the Sky is Seattle’s lone true center. However, the 6-foot-5 post has only played just over seven minutes in each of the first two games, managing to foul out in that span against the Mercury.

When the Storm need a big presence in the paint, and the height that Langhorne doesn’t provide, expect them to go to Gatling. 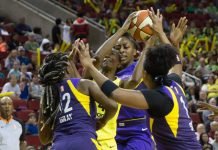 The night before games two

Pac-12 preview: the University of Arizona