The first year of major rule changes in NCAA Division I women’s basketball has sped up the game, but some new measures received mixed reviews, one official said. And on the horizon: sales.

The NCAA Playing Rules Oversight Panel voted last June to make significant changes to game rules to improve the quality of play. New regulations included breaking the game into four quarters, giving each team four timeouts and a media timeout per quarter, allowing quicker advancement of the ball to the front court, and permitting hand checks on offensive post players.

Anucha Browne, NCAA vice president of women’s basketball championships, said overall reaction to the measures to speed up the game has been good. The Panel is still soliciting feedback from coaches, athletes and stakeholders to see if further rule tweaks should be made.

“The goal was to improve the pace of the game and provide more logical stopping points,” Browne said. “The fact that we’ve gone to quarters gives coaches a chance to reset. Now they have the opportunity to figure out what’s going on in a game rather than wait for halftime.”

“With regard to the pace and flow of the game, we have done things to dial back the physicality of the game and call the game the way it was meant to be called.”

Browne said the new timeout structure is a source of disagreement among stakeholders.

“The number of timeouts was reduced but their length was extended, and that has received a variety of feedback,” she said. “Some say timeouts are now too long, while others have seen them as beneficial because the student athletes can sometimes coach themselves. The jury is still out on that.”

Next year, the focus will be on marketing women’s basketball, according to Browne.

“One of our biggest challenges is ensuring that campuses are fully engaged in marketing,” she said. “It’s not about throwing money at women’s basketball – it’s about going out into the community and establishing a presence in the community. It’s about engaging in valued activities that galvanize support for the game in the community.”

The goal is to have a staff member in the athletic department of each school whose job is to actively market the women’s basketball program.

“Once a school gets to a championship, fans are fans of a team, but we haven’t evolved yet to where fans just go out and see a team,’ Browne said.

“The NCAA has hired someone whose job it is specifically to help campuses during the regular season. We have many data bases that campuses can use; that’s how we’re supporting them.”

Browne said she has a vision for when the rules changes have solidified and women’s basketball marketing is up and running.

“We want to be screaming from the rafters that we’re doing great things, and that our student athletes are phenomenal,” she said. “That’s what people need to know.” 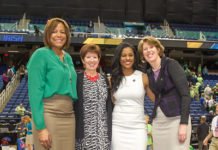 Decline in women coaching issue is complex, with solutions

Connecticut anticipates a challenge in UCLA

Taking a moment to digest it all

Showing up and showing out