It’s been less than a month since the Washington Huskies and Stanford Cardinal faced off in a wire-to-wire Pac-12 Tournament thriller.

The smart money heading into the NCAAs would have assumed that would be the last time the conference foes would match up with each other in 2016.

Of course, it wouldn’t be called “March Madness” if not for the yearly shockers.

And after a 12-point first round victory over Penn, the Huskies have pulled the most stunning pair of upsets in recent tournament memory.

Beating fifth-ranked Maryland and No. 12 Kentucky in a five-day span would be an impressive feat on its own. But beating the Terrapins in College Park and the Wildcats in Lexington? There’s little doubt that the Huskies have faced the toughest path to reach the Elite Eight, which now once again pits them against the Cardinal.

What makes the feat even more eye-opening (if that’s possible) has been the reliance on the starting lineup to shoulder the burden, and the fact they they’ve remained productive for all 40 minutes each time.

For much of the second-half of the season — especially after the loss of guard Brianna Ruiz to a season-ending knee injury in January — the Huskies have employed a rotation that rarely goes past six or seven players.

While the lineups stayed mostly the same — sans forward Mathilde Gilling, who played just five minutes on Friday after suffering a knee injury in College Park — the routes to victory were somewhat different.

Plum and Walton provided much of the scoring punch against Maryland, combining for 52 points (32 from Plum), while the duo had 53 against Kentucky (this time with 30 from Walton). Meanwhile, Osahor added 19 points against the Wildcats to put the offense over the top.

Osahor has also dominated on the boards as the leading rebounder in both games.

Against Maryland, the UW muscled its way to the foul line, going 20-for-22 from the charity stripe (16-for-17 in the second half), while shooting just under 40 percent from the field. On Friday versus the Wildcats, the Huskies went just 8-for-16 from the free throw line, but shot nearly 60 percent in the second half to pull away in the game’s final minutes.

The tournament run has now led to a rematch with a Stanford team that pulled a stunner of its own with a 90-84 win over No. 1 seed Notre Dame on Friday.

In at least one way, Sunday’s Elite Eight matchup provides one less challenge for Washington: After back-to-back road wins, the Huskies get a neutral court opponent in the Cardinal.

While the UW lost its first matchup to Stanford in late January 69-53, on a night where the Huskies shot just 25 percent from the field and were outrebounded 49 to 30, they leveled the season series with a 73-65 Pac-12 Tournament victory. In that game, the UW flipped the script, shooting 47 percent, and outrebounding the Cardinal 37 to 31.

Even before knowing who their opponent would be, the Huskies said they were focused on the task at hand, rather than the potential for the program’s first Final Four appearance. 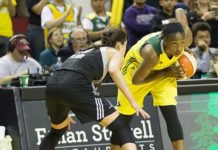 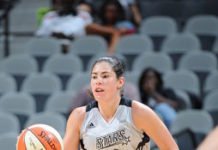 Only one playoff spot left

Conclusion of round one brings more upsets

A wee bit more before the second round