The American Athletic Conference has 11 teams. Six of the American Athletic Conference’s 11 teams play on day one of the conference tournament, March 4-7, and five get a bye. This year, there was nothing complicated about the seeding: the six all have losing records (conference and season) and the five all have winning records (conference and season). SMU defeated Temple by 2 points at home in early February. No other team in the lower six has beaten a team in the upper five.

The Tournament is at the Mohegan Sun Arena in Uncasville, Conn. Sunday’s contests, at 4:30pm and 6:30pm, will be televised on ESPN2, while the final at 7 p.m. Monday will air on ESPN.

Senior Moriah Jefferson, last year and this the best point guard in the game, and possibly the best of a long line of UConn greats. Nearly always the quickest player on the court, she scores 13.2 points (.566), dishes 5.4 assists, grabs 2.7 steals, and shoots .394 from three-point range (.429 in conference). She is the floor general, with great court vision, and an innate ability to control the pace and flow of each game, keyed to the needs of the moment.

Senior Morgan Tuck is the calming presence on the court, a great post defender at just 6-2, and the “glue” that keeps the Husky machine working to perfection. She has patience and outstanding moves in the paint. In the last month, her shooting percentage has suffered, but like the other seniors, she rises to the competition, and should have an outstanding post-season.

Freshman Katie Lou Samuelson is peaking at just the right time. She averaged 17 points and .576 FG over the final 3 games of the regular season, including 12-25 from beyond the arc. She is just figuring out that she has Stewart-like skills at 6-3, and is beginning to use them to expand her game. Her development is a key to the post-season.

Sophomores Kia Nurse and Gabby Williams round out the principal rotation for Coach Geno Auriemma. Nurse’s hard-nosed consistency keeps her on the court, and her 3-pointer seems to have returned this week from a long hibernation. Williams is the energy additive off the bench. The team’s best athlete, when she is under control she can change the tenor of the game.

UConn’s scoring dominance often overshadows the fact that they are the best defensive team in the nation, yielding just 48.1 points per game, a large number of those in fourth quarters when the starters are sitting on the bench. Team quickness, outstanding rotations and communication, and Stewart’s blocking ability as the last line of defense make it hard to score anywhere except from three-point range, where the defense is ranked just 121st (.301). But a team has to hit a lot of threes to keep up with the Husky scoring machine.

UConn has never lost an AAC game. The team has won 113 of its last 114 games, and 66 in a row. No reason to expect that won’t be 69 on Monday night. They should stomp the #8-9 winner (likely East Carolina) and defeat the #4-5 winner by more than 20 in the quarters. The final against USF should end as the game did last Monday, but without such a poor first quarter  by the Huskies. UConn by 16.

USF has great team quickness, tenacious defense and the league’s second best coach in Jose Fernandez. The Bulls also have the AAC’s leading scorer, senior guard Courtney Williams (21.9 ppg). Generously listed at 5-8, the athletic Williams is also the league’s fourth best rebounder at 8.8 a game, more than UConn’s Stewart! Fernandez also has the services of the league’s leading rebounder, senior forward Alisia Jenkins (11.8 rpg). The defensive disruption caused by physical play and overall team speed against UConn last Monday demonstrates why USF is nationally ranked again this season (currently 20 in both polls). They play great team defense, but the offense relies on individual play; the bulk of the scoring comes from the unguardable Williams and from offensive put-backs by Jenkins. Williams is a high-volume shooter (.429) with a sweet step-back jumper. Her domination of the offense leaves her teammates with little opportunity to spread the scoring. The Bulls have no bench; against UConn, five players logged all but five minutes of time. Their best three-point shooter Kitija Laska (70-165, .424) has missed the last three games with a right ankle sprain, and is listed as “questionable” for the AAC Tournament.

USF should easily reach the final after a secure double-digit victory over SMU. The quarter-final against Temple could be a challenge, but Fernandez’s experienced team should prevail against a very young Owls squad. The final against UConn could be competitive, but the Huskies don’t lose in this league. Not until next season.

Temple’s exciting young team could do some damage in this tournament and the next. Sophomores Alliya Butts, Tanaya Atkinson, and Donnaizha Fountain, join junior Feyonda Fitzgerald and lone senior Erica Coville in a dynamic and active starting lineup that logs most of the team’s minutes and scores 75 percent of the team’s points. They do not, however, do so very efficiently: Temple’s team FG percentage is .389. Nobody shoots the three very well. But this group has quick hands and feet and defends well player-to-player. They hold opponents to an even lower .386, and average 8 more possessions than their opponents. They blow nobody away, but they have potential to beat anyone in the league except UConn. In fact, they split their games with #2 seed USF, winning by 2 points at home and losing by 14 away. Butts leads all scorers with 15.5 ppg (5th in AAC), while Atkinson and Fountain each haul down 6.7 boards while scoring in double digits.

Temple should easily defeat Tulsa Saturday, then play USF close in the quarters. The Bulls’ experience should be the difference.

Memphis slipped into the #4 seed almost without being noticed. The Tigers outscored in their opponents by less than half a point on the season, but managed 18 victories, and split the season home-and-home with both teams – USF and Temple – seeded ahead of them. Senior guard Ariel Hearn is the leading scorer at 14.3 ppg, but does so with volume rather than efficiency (.373). Asianna Fugua-Bey leads the team in rebounding with 6.8. Memphis just plays steady basketball, counting on hanging around and then closing well. No one shoots the three well, but their field goal percentage is second only to UCoon in the league (.427). The Tigers’ defense is capable but, like much of Memphis’ play, un-flashy. They count on scoring enough, and defending enough, that they are stay in their games to the end. In this league, that strategy managed to win twice as often as it lost this season.

Memphis-Tulane at noon on Saturday should be one of the most competitive games in the tournament. It’s a pick-‘em game. Memphis defeated Tulane 83-67 in their only contest back on January 3, 2016. Same result, smaller margin this time. The winner gets Connecticut and a 20-plus point loss.

Tulane’s brings a great hope into the tournament that they may make some unexpected noise. Oddly enough, that hope is based upon one quarter of a 40 point loss to UConn last weekend. The optimism springs from the 1st quarter of that game, where they outscored the Huskies, holding the nation’s best to just 8 points, a season low. They are the only team to lead UConn this year after 10 minutes. Of course, the Huskies then outscored the Green Wave 51-11 over the next twenty minutes to right the basketball universe. Kolby Morgan led Tulane that night as she does most nights, scoring 19 points on 8-16 shooting, including 3-8 from downtown. The sophomore guard honed her basketball skills playing against her brother Malik, a member of Tulane’s men’s team, and her younger brother Kai. She averages 17.4 points per game, fourth in the AAC. Nearly a fifth of her points are free throws, a result of her aggressive drives to the hoop. Tulane’s only other double-digit scorer is Morgan’s backcourt mate, junior point guard Leslie Vorpahl (11.6 ppg) whose 5.4 assists per contest lead the league. Behind these two, Tulane has managed 20 wins through quickness, and a sometimes smothering defense.

At one point in the season, Coach Lisa Stockton’s team was a bubble team for the NCAAs, but they were unable to beat the teams that finished above them in the AAC, and will need a tournament victory – probably two – to be selected. They have a decent shot at defeating Memphis on Saturday, but the second game would be against UConn who beat them by 98 point in two games. It’s probably an WNIT year.

Memphis-Tulane at noon on Saturday should be one of the most competitive games in the tournament. It’s a pick-‘em game. Memphis defeated Tulane 83-67 in their only contest back on January 3, 2016. Same result, smaller margin this time. The winner gets Connecticut and a 20-plus point loss.

Prediction: An easy victory over Houston by 12; bad loss to Temple by 20

In brief: Too many turnovers, not enough rebounds. The 44-28 victory over Houston must have been one of the most boring games of the AAC season. Attendance averages 547 at Tulsa home games.

Prediction: Competitive pick-‘em game vs UCF: each team won at home this year, with huge disparity on the glass. They should lose to Temple if they win the 1st round: lost earlier to Temple by 20.

In brief: Big young team, good on the boards, with 6-3 Froling, her 6-2 twin Keely, and 6-5 Stephanie Collins leading the way. They need those rebounds, because the team shoots poorly. Boards will determine the victory in round 1. They lost the board battle two weeks back by 19 to UCF, but beat them by 18 rebounds in an early February win.

Prediction: A solid win on senior night over SMU makes the Pirates the favorites in the first Round, by 10. They get UConn next if they win. No more to say.

In brief: Payne has been a solid, consistent offensive player and team leader for five years. She averaged 24.3 ppg in the last three games of the season, shooting over 50%, a rarity for her. Taylor is an undersized rebounding machine. They get very little help. Turnovers kill this team. They shoot .283 on threes.

Prediction: Cincinnati creates no excitement on the court. Lost to ECU twice, second time by 22. Should lose by 10. They get UConn next if they were to win. Lost to Huskies by 116 in two games.

In brief: Outrebounded by 10 per game, ironic given the tenacity on the boards of their Coach. Shoot a lot of threes, miss way too many (.287). A quiet team with no bench support. Commit 1.6 turnovers per assist!

Prediction: They actually beat SMU two weeks ago by 11, and won on the boards with a 19 rebound advantage over a tall SMU, after an earlier win with an 18 board advantage. That level of tenacity could pull an upset. Then a loss to

In brief: The Knights won only four games. Their leading scorer (14.0ppg) shot just .349 from the field. Decent rebounding team, adequate defenders. Boards will determine the winner. They should lose to USF by 20 if they make it to round 2.

Prediction: Loss to Tulsa by 15. That 44-28 game v. Tulsa three weeks back is probably what this late-night game will resemble.

In brief: Houston has won 5 games in the AAC. In three years. That will not change during this tournament. A poor basketball team all around. Lots of work to do. 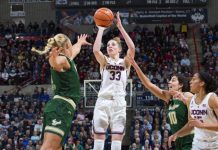 AAC Tournament kicks off with Connecticut in the driver’s seat 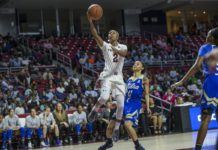 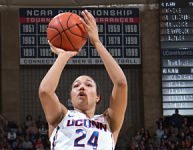 Jody Wynn in at Long Beach State, Mark Trakh out at...

Sparks owner follows through on promise, Milton-Jones and Hoffman learn about...