Home College Gail Goestenkors waiting for her next adventure

Two weeks ago, the WNBA’s Indiana Fever announced that assistant coach Gail Goestenkors had resigned after one season “to pursue other opportunities.” I caught up with the former college coach today, who said she is not actively looking for a new job at the moment.

“I’m not pursing – that sounds like I’m trying to go after something,” Goestenkors said with a laugh. “I’m wide open. I loved my summer with the Fever; it was amazing. But at the end my heart was saying, ‘this isn’t where you’re supposed to be.'”

Goestenkors has been doing broadcast commentary for the Southeastern Conference Network this college season. Right now she is preparing for the conference tournament, and hasn’t yet thought about what she’ll do next.

“Who knows what the future holds, I have no idea,” Goestenkors said. “I’m ready for a new adventure, I just don’t know what it is.”

“I might try to figure it out over the spring, but if it doesn’t happen, I will enjoy my summer. I have complete faith that the right opportunity will present itself.”

“I don’t know if I want to coach again, but I wouldn’t be surprised either way,” she said. “It would have to be the right situation.”

Goestenkors said the biggest reward of her coaching career has been seeing her athletes grow into women.

“The biggest joy is that everybody graduated,” she said. “Seeing those athletes come in as young girls, unsure of themselves, and seeing them grow and leave so confident and empowered. I love facebook for that reason, because I continue to watch their lives and their growth. I get more joy from that than anything.” 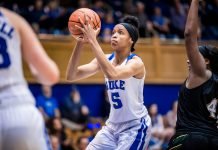 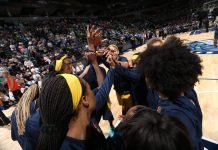 Championships on the line today

That slow down time in December