Jim Littell is one game away from guiding Oklahoma State to their fourth consecutive 20-win season in his fourth full year as head coach. In 2012-2013, the Cowgirls made their first appearance in the NCAA Tournament since 2010. The next season, they went to the Sweet 16. This year Oklahoma State has been ranked in the top 25 for the last several weeks.

Littell had been associate head coach to Kurt Budke for six years when, in Nov. 2011, Budke and assistant coach Miranda Serna were killed in a plane crash. Littell was made acting head coach, and on Dec. 9 was elevated to head coach. He was formally appointed the program’s head coach the following spring, after he had lead the team to the WNIT championship.

Prior to his arrival in Stillwater, Littell was head coach at Seward County Community College in Kansas for 14 years. There he had a 418-61 (87 percent) record and guided the Saints to nine conference titles while collecting nine coach of the year honors. From 1995-2004, the team had an unprecedented home winning streak of 135 games. Littell was inducted into the National Junior College Athletic Association Hall of Fame in 2009.

His first head coaching position was at Friends University from 1983-1988, and he had various successful stints as a high school coach both before and after that.

Sue Favor: No one has had an ascension into the realm of Division I head coach like you had. How were you able to deal with your own grief and shock, that of the team and the staff, and keep the program moving forward as you have?

Jim Littell: It was a very difficult year, that first year. Kurt Budke was my best friend. He was my best man at my wedding; his wife played for me. I still think about him all the time. But Stillwater is a special place with a family atmosphere. The team handled adversity very well. We were supposedly to be the first team out of the WNIT that season but we played six games at home on our way to the title, and built up our fan base with family and friends.

Sue Favor: Have you retained elements from Kurt Budke into the current program?

Jim Littell: I feel like I’ve put my own stamp on it, but we were very similar in our coaching philosophies: playing great defense, going after rebounds, solid with the basketball. Kurt and I were roommates at Friends University – he was the head men’s coach and I was the head women’s coach.

Sue Favor: You’ve had tremendous success in the past, including an incredible nine-year home game winning streak at Seward County Community College. What are the keys to maintaining player motivation and consistency?

Jim Littell: It’s important to surround yourself with good people on a daily basis, and to have strong recruiting. The Seward County kids were very motivated and success-driven, as many had won state championships (in high school). That’s how we continue to recruit, is with dedication. I’ve always said I’ll take the lesser player who is great in the classroom.

Sue Favor: What is the foundation of a successful program?

Jim Littell: We coach here more on preparation than on outcomes. We try to do right in the classroom and on the court, and the wins will take care of themselves. Very seldom do we talk about rankings. It’s about preparing, whether we’re facing Baylor, Oklahoma, or whomever; it’s taking care of business on a daily basis. We focus on preparation.

Sue Favor: It seems like your players are high energy this year, and you’ve had quite a surge lately.

Jim Littell: The strength of this year’s team is our chemistry. In 30 years of coaching, I’ve never been around a closer group. They like each other off the court, there’s no jealousy and no drama. They hang out together well off the floor. Eighty percent of our baskets come from assists.

Sue Favor: What do your players mean to you?

Jim Littell: They’re like my own children. I’m tough on them because I expect a lot out of them, and I want them to fully excel i the classroom and on the basketball floor. I’m trying to prepare them for the next 50 years of their lives, and nothing teaches better than athletics. They learn how to work, how to sacrifice, and how to work together on a daily basis. Basketball teaches how to handle adversity – especially in this league, with the ups and downs. You’d better learn to turn the page, whether you just had a great win or a loss. There is not a lot of extra room in the Big 12.

Sue Favor: It seems like you have a distinct identity at Oklahoma State. What is the Cowgirl way?

Jim Littell: We hang out hats on defense and rebounding. We have held seven conference opponents to points totals in the 40’s, and when we do that we give ourselves a chance to win. We put high emphasis on playing good basketball without fouling.

Jim Littell: I want to compete for championships. We’ve raised the bar, and if we win one more we will have five consecutive 20-win seasons. We’ve been a bit of an unknown. We want to be consistent and do things we haven’t done in a while. This season we swept Oklahoma, and we hadn’t done that since 1998. We hadn’t beat Baylor since I’ve been here, and we did that too. We want to play at a higher level.

Sue Favor: What has basketball taught you about life?

Jim Littell: It’s taught me many things that have helped me in life. From many things I’ve been through I’ve come to understand that basketball is not the most important thing in life. Do we want to win? Absolutely. But when (sophomore guard) Sydney Walton’s mom was diagnosed with breast cancer, Sydney played for her mom. When I have kids who played for me 15 years ago come to games now, update me on how they’re doing and call me, that’s one of the best things. Wins and losses come and go, but it’s about people.

Sue Favor: What’s your favorite thing to do after a win?

Jim Littell: Right after a win, and we’re singing the alma mater, I’m already thinking about what we’re going to do for the next game. It’s my worst characteristic, not being able to enjoy the moment. I’ve had 700-plus wins in my coaching career, and my quality of not being able to smell the roses – I’m not proud of that. It’s an illness, and I’m trying to get better. 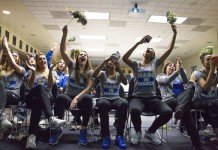 Starting to get a better picture