Lisa Bluder is in her 16th year as the Iowa Hawkeye’s coach, and her 32nd year of coaching overall. She is one of nine active major college coaches with 600 wins or more, and is the winningest coach in Iowa history, guiding her teams to postseason play 14 times. Over the years, a great many of Bluder’s athletes have received awards for both their play on the court and their academic performances. Last season the Hawkeyes reached the Sweet Sixteen for the sixth time in program history and the first time since 1996. After the season Bluder won the Carol Eckman Award for coaching. This past summer, she was head coach for the Pan American Games team, which won a silver medal in world competition.

Bluder began her career as head coach of NAIA St. Ambrose University, and then spent ten years as coach of Drake University, where she guided the team to five postseason appearances.

An Iowa native, Bluder played at the University of Northern Iowa. She and her husband have two daughters and a son.

Sue Favor: Thirty-two years is such a long time to have been coaching. The game has changed, young people have changed, you’ve changed. What do you do differently now than you did in the 1980’s? The 1990’s? The 00’s?

Lisa Bluder: A lot has changed. Now is the best time to be a student athlete, because you’re provided for. There’s no comparison to what it was like decades ago, and I wish we could take all of today’s players and put them in a time capsule so they could see what it was like. Players are quicker, more physical, do more weight training and have better nutrition. There is more fan support and media coverage. There is more technology, more scouting, and more information available at your fingertips.

Sue Favor: How do you stay relevant as a coach?

Lisa Bluder: No matter how old you get, being around young people helps keep you younger, and 18-22-year-olds are the most energetic people in the world. You have to be willing to change with the times. You have to be more patient with players than you used to be. I treat athletes from a parent perspective: how would I want my daughters treated.

USA Basketball was like a sabbatical for me because it’s where highly-successful coaches can learn from others. My Pan American assistants and I had similar philosophies in how to teach the kids, and we were all from different areas, so we could share without being competitive because we wouldn’t be playing each other. I have great respect for both of those coaches (Western Kentucky coach Michelle Clark-Heard and Oregon State coach Scott Rueck).

Sue Favor: How do you motivate athletes now as opposed to when you first began coaching?

Lisa Bluder: I understand better now that you need to motivate kids. I used to think they just stayed motivated, but that’s not true anymore. You have to work to keep them engaged because their attention spans are shorter.

Sue Favor: Do you have a singular-most outstanding season in your career?

Lisa Bluder: Certainly last year, getting to the Sweet Sixteen – it was a breakthrough. In 1995 at Drake, going to the NCAA Tournament for the first time; the first trip is always tremendous.

I’m glad I worked my way up the food chain. At St. Ambrose, you had to be a jack of all trades.

Sue Favor: To what do you attribute your long record of consistent success?

Lisa Bluder: I’ve had an incredible support system, the first being my husband, because if you don’t have someone who backs you, it’s hard. He gave up his career and stayed home to raise our children. Then there are my assistant coaches Jan Jensen and Jenni Fitzgerald, who have each been with me for 24 years. They are very loyal and really good at their jobs, and they both know they could coach at the Division I level. Lastly, you have to have a lot of passion and a lot of grit, because there will be good days but there will also be a lot of bad days. There are a lot of driven people in this profession.

Sue Favor: What attributes define you as a coach?

Sue Favor: Did you have mentors in coaching?

Lisa Bluder: My high school coach in Iowa was this young woman named Sue Kudrna, and she was an All-American. I was a sophomore when she was hired, so here comes one of the best players in American to coach us. She showed us there was something after high school to shoot for – that we could play.

When I started coaching, Vivian Stringer was coaching at Iowa, so I would sneak over to campus sometimes and catch a practice. I grew up 30 minutes from this campus, and getting this job was a dream come true. It’s allowed my parents and my in-laws to be a part of this journey.

Sue Favor: What do you love most about your job?

Lisa Bluder: I love being a Hawkeye. I’m surrounded by greatness, and it’s exciting to go to work in a place that’s achieving in both athletics and academics. I love helping young people achieve their goals and do things they didn’t think they could do. We’ve surpassed a lot of people’s expectations over the years, and that’s fun to do.

Lisa Bluder: This may seem strange, but I don’t have a music playlist. I might be the only person in America that doesn’t have an iPod or listen to Pandora. In the car I might have on XM radio or 70’s music; the bridge is my second choice. My favorite girl band is Heart, and I got to meet Ann and Nancy Wilson the night before we played in the Sweet Sixteen last year, which was incredible. 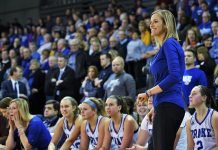