Michelle Clark-Heard is currently in her fourth season as head coach of her alma mater Western Kentucky University. In her first three years the Lady Toppers posted 76 wins, went to the NCAA Tournament twice, won two conference titles and won a Conference USA record 30 games last season. This year so far, the team is 14-2 overall and 5-0 in conference play.

Clark-Heard didn’t begin playing basketball until ninth grade. She played at WKU under Hall of Fame coach Paul Sanderford from 1987-1990, and was part of four NCAA Tournament teams, two Sun Belt Conference Tournament championships and two regular-season titles. For a while after college, Clark-Heard worked in parks and recreation. She didn’t begin coaching until her late 20’s, when she started as a high school coach. From there she spent four years as a graduate assistant at Nebraska, three years as an assistant at Cincinnati, two years at Division II Kentucky State as head coach, and five years as an assistant coach at Louisville for head coach Jeff Walz.

Sue Favor: You returned to your alma mater and have set the program on fire. How did you do that?

Michelle Clark-Heard: I’ve been very fortunate to have a great staff, and an associate head coach in Greg Collins who has been with me for three and a half years. When we originally sat down and talked about what we wanted to do we had a vision, and we took steps to put it in place.

I’m very big on defense, and I wanted to get players in best shape we possibly could in that regard. Then I wanted us to get the most points on the board. We chose an offense we could stick with, and we kept getting better and better. At the time we had a few players whose confidence wasn’t very high, so what we tried to do was put them in positions where we didn’t give them too much, but let them get really good at what they were doing. We initiated a motion offense and got into shape. I told them if we could get to 500 and get to the postseason, we’d be doing well. By time we got to Christmas that year we had won 11 games already, so we changed our goals and tried to continue to elevate the program.

I believed there was room in the state for three top 25 teams. I knew it would take time, but I really believed it. When I played at WKU, we averaged 7000-9000 fans. I still think about those things and I dream big. Now we average 19,000, and I hope as the years go on we can keep getting better. You’ve got to win and put a good product on the floor.

Sue Favor: What is the lens like, from being a player in the program years ago to coaching it now?

Michelle Clark-Heard: Every single day that I come in my office, or when I pull up to work, I get chills. I feel so fortunate and so blessed because a lot of people would like to be at their alma mater. I know it sounds cliché but I don’t take anything for granted. I live in the moment, and I try to practice what I preach.

Sue Favor: You came late to basketball, starting to play only in the ninth grade. And you also came late to coaching, not stepping foot into the business until almost a decade after college. Would you consider yourself a late bloomer?

Michelle Clark-Heard: Definitely, and I think that goes along with what I just said, that I relish every moment. I did start a little later than anyone else, and I’m very fortunate in that I worked with children for a time. I’m blessed to have had Paul Sanderford, who believed in me and thought I’d be a good college coach. I know how quickly things can turn.

I’m fortunate to have crossed paths with a lot of great people. I’m very fortunate to go from DII to this job. When I’m struggling, I think of those days.

Sue Favor: How has your unique career pathway prepared you to be where you are today?

Sue Favor: Which coaches, whether they are ones you played for or worked with, taught you the most?

Michelle Clark-Heard: All have taught me something different. I credit Paul for getting me into coaching. He’s a Hall of Fame coach and I learned a lot from him, including how to be a people person. He made everyone feel like they were a special player on that team.

Jeff’s mind is incredible, as he sees the game a lot before it’s being actually being played. That helped me a lot and helped me to get better on the X’s and O’s side.

I’m really big on the relationships – I love that part about coaching. I find a way to make sure I’m impacting every young lady I come across.

Sue Favor: What inspires you in coaching?

Michelle Clark-Heard: Seeing our players accomplish things they didn’t think they could do. It inspires me to be one of the top programs in the country. There are not too many top 25 mid-major programs in the country. Trying to get us to stay there and be part of the conversation. What drives me is that not a lot of programs have over 900 wins, and we’re one of them. Every day that inspires me to keep pushing.

Sue Favor: What is the recipe for growing a team and a program?

Michelle Clark-Heard: To have a plan in place and stick with your plan. Some coaches try something and are ready to scrap it quickly if it’s not working right away. If it doesn’t look like it’s working, you can’t just switch it up randomly; you have to keep pushing. We stuck with our plan and kept grinding it out. As a result, each year we got a little better with our offense and defense.

Sue Favor: This past summer you coached with USA Basketball for the first time, as assistant at the Pan American Games. What was that experience like?

Michelle Clark-Heard: It was the coolest and most amazing opportunity I’ve had. I’ve had some amazing experiences, like going to the Final Four. But representing your country, every day hearing your name being called out in front of other nations, hearing the U.S. Anthem, I don’t know if I could top that. Worked with amazing coaches in (Iowa coach) Lisa (Bluder) and (Oregon State coach) Scott (Rueck). We still text each other all the time and watch each other’s games. That’s a bond that won’t be broken.

Sue Favor: What is your favorite move in the world?

Michelle Clark-Heard: Oh, this might surprise you, but “Pretty Woman.” I’m one of those dream chasers right there. 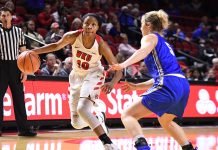 Western Kentucky’s Tashia Brown quietly becomes a leader, and one of the nation’s best

Crazy day in the W