The Georgia Bulldogs came home last week from a Thanksgiving tournament in Southern California on an overnight flight that got them there early Monday morning. After landing, everyone headed home or to class except senior point guard Marjorie Butler.

She stayed at the airport to catch another flight – to Virginia, to interview for medical school. After that, she flew to Tennessee for another interview with a school the following day.

Extra air miles aside, it was a pretty typical week for the 22-year-old starter, who will graduate next spring with two degrees before beginning her quest to be an orthopedic doctor.

“She had texted me while traveling and asked me to email her the Mercer scouting report,” coach Joni Taylor said. “I told her ‘no, focus on your interview.'”

Any student athlete can attest to the challenges of balancing sport and academics, but Butler, a highly-ranked recruit from Tennessee, has turned that juggling act into an art form.

She came to Georgia with 54 credits from advanced placement classes, and has remained on the honor roll every semester. She finished an exercise science degree last spring and will earn a biology degree next year. Butler passed the Medical College Admission Test a few months ago, and has been traveling the country between practices and games on a quest to find the right medical school to attend. She had eight interviews planned going into the fall.

On the court, Butler has steadily improved her game each season. Her specialty is assists; she is ranked fourth in that category right now in the Southeastern Conference.

To know Butler’s story is to begin to understand what drives her.

But as far as Taylor is concerned, she hasn’t known an athlete quite like Butler before.

“Marjorie isn’t one of those people who just says they they want to do and talks about it,” Taylor said. “She knows what she wants to do, she has a plan, and no one’s going to stop her. She came to Georgia with a plan.”

“She’s very focused, extremely bright, and it shows in everything she does.”

Butler and her twin brother are the youngest of four children in an athletic-minded family. She began playing basketball in first grade and also played football for many years. But her sister Lauren, three years older, wasn’t so lucky: she was born with cerebral palsy. It had a big impact on Butler.

“She has struggled throughout her life,” Butler said of her sister. “She wore ankle braces and leg braces for five years just to learn how to walk. When she was 13, she had a cochlear implant done. I remember her shopping for wigs to cover up her bald head during that time.”

Butler said it is her sister’s inspiration that first kindled her fire to become a physician.

Butler was a star on the court throughout her high school career in Knoxville, and had just signed with Georgia in November of her senior year. Two weeks later – on her 18th birthday – her season came to a screeching halt when she tore her ACL.

“That was a very depressing situation, as it was on my birthday and it was during the third game of the season,” Butler said. “Eventually I got past my grief and realized it wasn’t just about my goals; I had a whole team of 12 with goals, too. I acted as a player-coach, helping my coach, and we ended up winning state that year, so it turned out well in the end.

“Medicine has been an inspiring field for me, but tearing my ACL gave me a different insight into the medical field,” she said. “I understood better what is involved.”

When she first got to Georgia with so many extra credits, Butler wasn’t sure how to attack her goal, but she quickly decided that a double-major was the way to go. Thus began the balancing act she has maintained for the last four years.

Sometimes, due to games, Butler will miss classes. In other instances, classes have caused her to miss practices. She works with professors and coaches to make up for that.

“I miss a lot and try to communicate as best I can with the professors and my coaches,” Butler said. “I have had an extremely strong support system here at Georgia.”

“The skill it takes most is time management. I have to do a lot of work on my own, whether it’s sitting at airport and doing homework or talking with teammates to make sure we’re on the same page before a game. My teammates are great.”

Last Wednesday, after returning from her second medical school interview, Butler read the opponent scouting report, met with coaches to catch up on what she missed, and talked to her teammates to prepare for the game.

“It’s not just me being able to do this – it’s a testimony to my teammates,” Butler said.

“Last spring she was taking a class that meant she missed our Tuesday and Thursday practices. Tuesdays, we usually go over offense and the scouting report for the whole week for SEC play,” Taylor said.

“We wouldn’t see Marjorie Tuesday, and she’d show up Wednesday having read everything. She had got her own workout in on her own, and she had texted all her teammates with questions about what she missed. Every time, she was prepared for the opponent as if she’d been there the day before.”

Taylor said Butler has been an exceptional example of achievement to her teammates.

“She’s allowed us to say to other players, ‘what excuse do you have?’” Taylor said.

Butler’s professors can attest to her diligence on the academic side of her life, as well.

Dr. Mary Bedell, an associate professor in Georgia’s department of genetics, said Butler was in one of her large classes one year ago. With two sections, Bedell had over 400 total students. But Butler’s name rose to the top because of her work in the class: she ended up being one of the top students overall.

A longtime women’s basketball fan who regularly attends games, Bedell was happy to have Butler in her class, and appreciates the challenges she has faced in being a student-athlete.

“It’s tough to balance a schedule, even without the travel for med school interviews,” Bedell said. “Being an athlete and taking a full load, it’s really unusual for a student to have a double major in the sciences. One thing many don’t understand is that many underclass courses have lab time on top of class time.”

Taylor said Butler has improved as a player over the years because she’s been willing to let go.

“She thinks and analyzes so much that it was hindering her on the court when she first got here,” Taylor said. “She’ so result-oriented and factual. She had to learn that we could put a plan together but in the end, you just have to go with the flow.”

“She has grown by learning to let the game come to her.”

That has proven especially useful this year, as she and fellow seniors Tiaria Griffin, Merritt Hempe and Shacobia Barbee are helping to usher in a new era for the Bulldogs. Taylor took over the program for the retiring Andy Landers, who was the only coach the program had ever had.

“We’ve got a great group of seniors this year, we’ve been through so much,” Butler said. “The ups and downs have brought us closer together. We support each other, and know each other really well.”

Butler said that players were initially upset when Landers retired, but they quickly embraced Taylor.

“Once we got past that grief (of Landers retiring), Joni stepped in and let us know she was going to be positive….and it shows on the court when we play,” Butler said. “She’s done a great job stepping in. She’s young, and she’s a role model to many players and recruits. She’s played at the collegiate level and knows a lot about what we’re experienced and what we want to do. That’s someone that a young woman wants to play for.”

So far the Bulldogs are clicking this season, as they are 9-1 and have won their last eight consecutive games.

Butler said after this year, she doesn’t plan to play professional basketball and will focus on medical school – but it’s not because she doesn’t love the game.

“I have had three knee surgeries. Something most people don’t know is that I play with a lot of pain,” Butler said. “You’ve got to make the most of the cards you’re dealt, and I could get more knee surgery. But I’ve accepted where I am.”

Without knowing about Butler’s confession, Taylor said she suspected the young athlete might be holding back.

“I talked to her right after she tore her ACL,” Taylor said. “I tore mine in college, and I told her she can’t come back too fast. Maybe some of the problems she’s had (with her knee) are because she did come back too fast. She might not be completely truthful about her pain level.”

Butler’s dogged determination will serve her well in medical school, her coaches and teachers say.

“She’ll be very successful at the next level – she’ll be awesome,” Bedell said.


Warning: A non-numeric value encountered in /home/womens07/public_html/wp-content/themes/Newspaper/includes/wp_booster/td_block.php on line 326 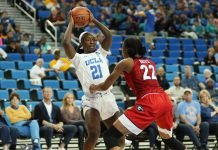 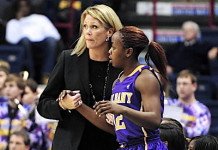 
Warning: count(): Parameter must be an array or an object that implements Countable in /home/womens07/public_html/wp-includes/class-wp-comment-query.php on line 405

A bit of everything on a summer Friday

Walz and Louisville “cashing in” on last season’s success