Coach Vic Schaefer begins his fourth season at Mississippi State this year, to follow up an exciting 2014-2015. The Bulldogs spent most of the season ranked in the top 20, ended with a SEC third-place record of 27-7, and advanced to the second round of the NCAA Tournament. Schaefer was named conference co-coach of the year.

This season promises to be much of the same, as MSU has four starters and 10 others returning.

The longtime coach began his career at Sam Houston State, where he originally coached the men’s team before taking the helm of the women’s program from 1990-1997. Schaefer was assistant coach for Gary Blair at Arkansas from 1997-2003, and again at Texas A&M from 2003-2012.

Schaefer’s associate head coach, Johnnie Harris, was also an assistant at TAMU and came with him to MSU.

Earlier this month, Schaefer delighted fans at the Bulldogs’ midnight madness event by entering the arena on a motorcycle.

Sue Favor: From the pictures, it looked like fans, athletes and staff loved your grand entrance.

Vic Schaefer: (laughs) It got the crowd energized. It was a lot of fun for me and for our players.

Sue Favor: You all had such a great season last year. What are you looking forward to most this year?

Vic Schaefer: This is a fun group to coach – they’re great kids. I enjoy my time with them as much off the court as on, and they’re a competitive group.

I’m looking forward to seeing how much we’ve improved. We’ve got 10 players back. One question is: how much has (sophomore point guard) Morgan William improved, and has she earned that starting spot? I’m anxious to see Morgan’s evolution as a point guard, as I know what she can do on open floor.

We have to find someone to replace (graduated forward Martha) Alwal inside. I think we will replace that. What we may not replace as easily is defense.

Sue Favor: You had a storied career before coming to MSU. What was your plan of attack upon coming in?

Vic Schaefer: We had the blueprint, and we’d proven it in my three previous schools. We came in here with our goal of winning championships. Top 20 programs are there every year, but our mission when we came here was to build a top 20 basketball program, and we’re well on our way to doing that. We knew the first year would be ugly, hard and rough; we knew what that would look like cause had been here before.

Sue Favor: Who is we?

Vic Schaefer: Johnnie Harris – she came with me. I’ve got a tremendous staff. I knew I couldn’t do it by myself.

Each year I’ve been at MSU, I’ve lost one assistant coach, but I feel like we’ve got better with the next person we hired. That’s part of the evolution.

Vic Schaefer: It’s a pure game, a game played below the rim. Tactically speaking, execution becomes very important in our game. I really like coaching women because they’re fun to coach and they play awfully hard. I think it’s a unique opportunity that’s not present in coaching guys. It’s an opportunity to impact people’s lives. Women are highly-motivated and they pay more attention to their grades. Every guy thinks they’re going to the (NBA). But with women, even if they do go pro, they’re not going to make a lot of money there. It’s important to develop them not only as basketball players but as young women, to empower them. I tell them, ‘I want you to have a corner office and not the cubicle up front.’

Vic Schaefer: We start out with fundamentals and then get to the meat and potatoes of offense and defense. We often sacrifice shooting for work on fundamentals. There’s a lot of up and down. We don’t do a lot of 5-on-5; we work 2-on-3, 3-on-4. That’s what allowed us to be successful over the years is try to break it down and progress on defensive philosophy.

Sue Favor: Gary Blair is so full of life, and so funny at times. Do you have any Blair-isms from over the years?

Vic Schaefer: We had 15 great years together, and there were so many great times, so many great wins, so many championships. I think so much of the guy, he’s done so much for our game. He’s a guy that paved the way for people like myself. There’s not enough time in the day to tell you some of the fun stuff we’ve been through.

One time we were on the plane after he’d just had Lasik eye surgery. I looked over and he’s got contacts on, glasses on, readers underneath his glasses and a magnifying glass trying to read something. I asked him, ‘how’s that Lasik working for you buddy?’ Not a day that goes by when I’m working and I don’t think about him. When you sit back down in that head coach spot you remember how much time it takes to run a program. It’s a tremendous responsibility that we have.

Sue Favor: What is the difference between the players we see today and the way they were when you first began coaching? What are the differences in the game?

Vic Schaefer: We’ve got bigger players now. Back then, 6-foot-3 was a monster inside, and now it’s a 3. Kids are bigger, faster and stronger. Sometimes skill set is sacrificed for the athleticism of a player. Pure shooting is something that’s not as prevalent. Having that person who can make shots isn’t as common. The fundamentals of the game are neglected sometimes as they’re playing so much during the summer and not working as much on the fundamentals.

Personally, kids are kids, and they still need direction, guidance and want discipline in their lives.

Sue Favor: When you do have some spare time, what do you like to do?

Vic Schaefer: In the summer I like to fish and play golf, and in the spring I’ll get into the woods and turkey hunt. I love our football coaches here at MSU, and right now I’m getting out and supporting them and our football team. 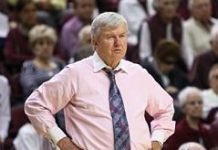 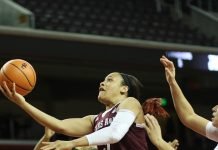 Chiney Ogwumike is rookie of the year