Stephanie Oliver was named head coach at Long Island University in Brooklyn, N.Y. last May, which is her first stint at the helm of a Division I program. She was assistant coach at Seton Hall from 2013-2015, and head coach at Division II University of Bridgeport for the three years prior to that.

A lifelong New England and New York-area resident, Oliver was a standout at Marist College, where she helped guide the team to their first-ever NCAA Tournament in her senior year in 2004. She quickly made herself at home this summer in the urban landscape that is LIU, and spent a lot of time with her athletes.

Sue Favor: You seem very happy to be at LIU.

Stephanie Oliver: I love the area, the facilities, and the administration. And it’s a good conference: there’s no flagship team. Anyone can win.

My whole goal was to go Division I head coaching. This is a great place.

Sue Favor: Tell me about your own experience playing college basketball, and how it shaped you to become a coach.

Stephanie Oliver: The first two years I played at Marist, our wins were in single-digits. Before my junior year, Brian Giorgis was hired as head coach. By my senior year, we were in the NCAA Tournament for the first time – we started that tradition there – the beginning of a dynasty.

It seems like every program I’ve been a part of (in coaching) since then has been about rebuilding. As a coach, I’ve loved the hard work involved in that.

Sue Favor: How would you describe your coaching style?

Stephanie Oliver: I’m super passionate and super intense, and I love passion and intensity in my players. Those two hours of the day that we practice are like Christmas to me.

I believe in sticking to the fundamentals and keeping it simple. And I always try to be super-positive.

Sue Favor: What is the best thing you learned as an assistant coach to prepare you for being a head coach?

Stephanie Oliver: Balance! From when I was a head coach at Bridgeport to my time at Seton Hall working for (coach) Tony Bozzella, I learned to balance basketball with life and family.

Sue Favor: What’s a typical day like for you?

Stephanie Oliver: Usually it begins with a staff meeting, then practice and then recruiting work. I give the team a practice plan the day before so there are no questions, and they feel empowered.

Sue Favor: How much do you see the athletes outside of practice?

Stephanie Oliver: Players are in and out of my office all day. They’re in the locker room, they’re watching TV, eating. I love it when they come in and tell jokes.

Sue Favor: How are recruits different from when you were playing to now?

Stephanie Oliver: The game has changed drastically; now it’s more in-depth. The rules have changed, and now it’s also all about what kind of gear you have. With AAU ball, some aspects are amazing, but in other aspects, it’s watered down the game. Player position (duties) have changed.

Sue Favor: Your husband Mitch is coaching where?

Sue Favor: It is challenging, having a commuter marriage?

Stephanie Oliver: Because my husband is a coach too, he gets it. He gets how it is with scheduling.

Sue Favor: What’s your goal for the season?

Stephanie Oliver: Play hard, improve every day and do the best we can do. 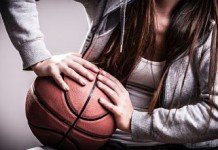 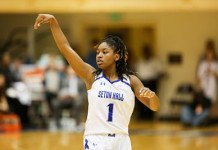 Seton Hall coming together as a family

On the way to National Signing Day, committments flow

The basketball world slows down just a little