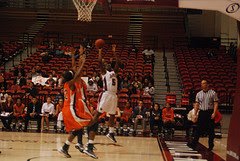 Coach Monica Quan, in the white blouse on the left side, sits with the other Cal State Fullerton coaches during their game at LMU Nov. 20, 2012.

Photo gallery from that game.

As the hunt continues for the man suspected of killing Cal State Fullerton assistant coach Monica Quan, she is being remembered by loved ones.

The Titans will play tomorrow for the first time since Quan’s death.

“She never changed. She was always positive,” said James who remained in contact with her as she went on to college and and became a coach herself…….

James and his Diamond Ranch coaching staff, which also knew or coached Quan, attended a vigil that was organized Monday night at Walnut High.

“Almost every kid who she played with was there,” James said. “That shows me there is a bond and respect there.”

There was a memorial Monday.

Other Big West Conference teams will wear orange ribbons in honor of Quan.

Media coverage round up of the death.

WNBA teams reload on draft night according to plan

Colson’s initiative leads Aces to their identity, and a playoff run

Fun, reflection as new and returning All-Stars take the court for...