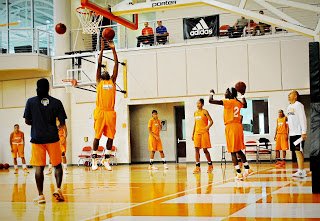 Jasmine Phillips gets off the ground, while #2 Jasmine Jones prepares to make an outlet pass

Sue Favor: What has the transition from Pat Summitt to Holly Warlick been like?

Maria Cornelius: About as seamless as could be expected, which makes sense since Holly Warlick was at Pat Summitt’s side for 27 seasons. When it was apparent last season that a change could be made, I was adamant that Warlick deserved that shot to be the head coach at Tennessee. She did have opportunities to leave – Indiana and Clemson had seriously pursued her in the past – and she stayed in her hometown.

Warlick also was the fair choice for the returning players. Their world was jolted when Summitt’s diagnosis was announced before last season, and Warlick provided that bridge for the program. Bringing in a completely new staff would not have been fair to the current team.

As it turned out, Warlick being retained – and her asking Dean Lockwood to stay – was critical for the class of 2013 recruiting. Bill Wagner, the high school coach of the top recruit in the country, Mercedes Russell of Springfield, Ore., has said the retention of Warlick and Lockwood were key to securing her commitment.

Lockwood deserves a shoutout for his loyalty to Tennessee and his recruiting prowess. He was the lead recruiting assistant for all three players who committed to Tennessee – Russell, Jannah Tucker, the wing from Maryland, and Jordan Reynolds, the guard from Oregon. His presence on the staff can’t be understated.

Warlick also showed that she learned from Summitt that a head coach is only as good as the people she surrounds herself with on her staff.

The three verbals from the class of 2013 all mentioned the relationship formed with Elzy and Law as also being key to their decisions.

So, given that a program had to make a new hire after Summitt had prowled the sidelines since 1974, it went about as seamless as possible. Warlick was the right choice.

Sue Favor: How often does Pat come to practice, and what does she do when she’s there?

Maria Cornelius: She comes to nearly all of them, even the ones that are held pre-dawn. She can’t coach on the floor, but she watches closely and will yell some encouragement to players from her spot on the sideline or perched against a basket support.

Her mind remains so engaged by basketball, and the players like having her there. Taber Spani beams when asked about Summitt being there. She is in Knoxville for one reason – Summitt. So to have her still around the program is a godsend for Spani.

This is another reason why Warlick was the correct choice. Some new head coaches might have flinched at having a legend hovering nearby. But Warlick worships Summitt, her former head coach at Tennessee, a mentor and a maternal figure.

Warlick wants her there, talks to her often and is completely at ease with Summitt’s presence. She has said it is her job to protect Summitt and take care of her.

Sue Favor: How does Warlick’s system differ from Summitt’s?

Maria Cornelius: To be honest, not much as of now. Warlick stresses defense and rebounding, the tenets of Tennessee basketball.

She demands efforts and won’t coach it. If a player won’t put out effort, Warlick won’t play them. Game minutes are earned in practice, and no starting slots are ever guaranteed.

Warlick also is returning to the style of defensive play that Tennessee got away from recently because of personnel not suited to play it, although a lot of that was caused by injury. From 2008 to last season, nine significant players were out with serious injuries. Tennessee was constantly having to put together patchwork lineups with players out of position, including the most critical spot of point guard.

Warlick wants the team to go back to full court pressure, suffocating defense. Summitt was always a man-to-man defense coach and she had to get away from it recently and rely more on zones.

Tennessee’s recruiting targets are agile, athletic and defensive-minded. They can play the old school version of Tennessee defense, the kind that Elzy played for the Lady Vols and can teach.

Warlick also doesn’t want Tennessee to lock into set offensive plays. She wants players to have offensive freedom, to read the defense, adjust and make decisions with and away from the ball. She is emphasizing player movement and spacing.

Tennessee will have set plays in the half-court setting, but the primary goal this season is to run, run, run. Warlick said she intends to use every player on the roster.

Sue Favor: What changes in the returnees stand out the most, both collectively and individually?

Maria Cornelius: Cierra Burdick used the summer to get in basketball shape. That first full summer from freshman to sophomore year is so vital in terms of game improvement and conditioning, and Burdick earned raves from the coaches for her summer work ethic and dedication.

Meighan Simmons is a better defender as a junior. She is using her speed, always an asset on offense, to her benefit on defense.

Ariel Massengale is more vocal, noticeably so. She is just a sophomore but she realizes she has to take ownership of a young team from the point spot.

Taber Spani has fully embraced the role of senior leader. If she can stay healthy, she can be a force for the Lady Vols because of her shooting ability and her natural leadership skills.

Kamiko Williams seems to understand that her defense can get – and keep her – on the floor. She is so athletic and skilled and needs to fully buy into the system into her final year.

Isabelle Harrison used the summer to get stronger. She worked out with her older brothers and then returned to campus and mentored the younger posts. She is already showing more poise on the court and making better decisions with the ball. 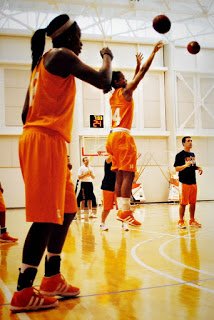 Andraya Carter lofts a jumper. Bashaara Graves is at left. Both are very athletic freshmen for the Lady Vols who will have to be ready this season

Sue Favor: You and others have said Andraya Carter is the most athletic Lady Vol you’ve seen in a while. What kind of things does she do to make her special?

Maria Cornelius: Her jumping ability is eye-popping. Her vertical leap – standing still, no step – has been measured at 30.5 inches, which puts her above the best ever recorded in college by Candace Parker and Glory Johnson.

She has natural quickness, laterally and north-south. She also has work ethic and attitude to match her skill set, which can take her from a very good player to a great one.

It is never a good idea to put too many expectations on a freshman, but Carter gives the Lady Vols depth at the guard spot, and she will keep the returning players honest. Coaches always want enough depth to push players into earning minutes, not getting them because of circumstances, and Carter will push for playing time.

The other three freshmen, forwards Jasmine Jones, Bashaara Graves and Nia Moore, also bring the same work ethic to the team. When freshmen help to set the tone, coaches feel a lot better about their team.

Sue Favor: What are some attributes about the other newcomers that Lady Vol fans can look forward to seeing?

Maria Cornelius: Bashaara Graves is a beast on the boards. She believes every rebound has her name on it, and she will fight for good position and hold onto the ball. It is rare to see a freshman that poised in the paint. She also has a left hand. She developed it before she got to campus.

Jasmine Jones has potential All-American skills. How she was rated No. 39 in her class I do not know. She has moves and counter moves in the paint and a silky smooth jumper, floater and up-and-under move. She has been well coached along the way. Her mother LaTrish Jones played for Alabama so she is a player’s daughter and grew up around the game.

Nia Moore is a coach’s dream – great attitude, listens, makes the most of her game minutes. She has a knack for being around the ball and making timely plays. She can help this team this season. She is also very athletic and agile so she can adapt to the team’s running style, as can Jones and Graves. None of the forwards are the type of players who have to set up inside to score. They can score in transition and early offense.

Sue Favor: How is the team coming together?

Maria Cornelius: They seem to be very close on and off the court. They know they are young and they know expectations have been lowered, and they feel challenged to show they are still Tennessee.

I think after the ordeal of last season – hearing your beloved head coach has early onset dementia was crushing – they can just focus on basketball now. The constant questions about Summitt’s status won’t be asked. Warlick has established that she can recruit and there is reason to believe the Lady Vols program will not just survive but continue to thrive.

Sue Favor: Do you think they deserved their recent #4 ranking by the SEC media?

Maria Cornelius: To be honest, yes. I voted them at #4. The coaches actually went lower and picked Tennessee at #5.

Preseason votes are based on rosters – who is coming back – and a host of unknowns. Who will develop? Who will stay healthy? Which freshmen will step up right away? Which newcomers will hit the proverbial first-year wall? Which upperclassmen will live up to expectations or exceed them? Who will fall short?

I actually had South Carolina in the top four, which Dawn Staley didn’t even believe when I told her at SEC Media Day. I told her the email was sent to the SEC office, and I had proof of my pick. I think her teams get under-ranked each year in the SEC, and she exceeds expectations. So I ranked them high. We shall see.

I also think that Tennessee has the potential to finish higher than fourth. I also know it’s a long season and the Lady Vols should be better in March than they are in November. They could take some hits along the way, and the SEC is a brutal conference. There are no easy games along the way and especially on the road. Even league champ Kentucky lost at Alabama last season. The players in the SEC are athletic and tough, and the games are physical.

It should be an interesting season to cover Tennessee with a new head coach for the first time in nearly 40 years and a team made up primarily of freshmen and sophomores.

It is still Tennessee. 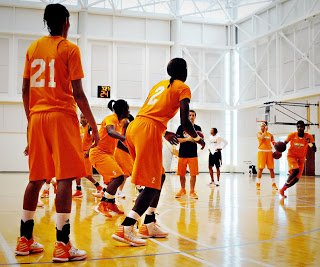 Many tops in class of 2010 have yet to commit

On a slow game night, the news flows

No Moore trouble for Minnesota

On the way to National Signing Day, committments flow