Class of 2013 #1 prospect Mercedes Russell has just announced she will attend the University of Tennessee. The 6-foot-5 center made her decision known moments ago at Springfield High School in Oregon, where she has lead her team to two consecutive state championships.

Russell, who averaged 25 points, 15 rebounds and six blocks last year, narrowed her school choices to Tennessee and the University of Louisville earlier this fall. She made official visits to each school this month, and then spoke with her mother, Tammy Hill, before making what Hill called a difficult decision.

“Mercedes was true to what she believed, which is that Tennessee is the best place for her,” Hill said. “She said it felt right the minute she got there – more so than any of the other schools she visited.”

Russell called Tennessee Coach Holly Warlick last night to tell her the news. She then called Louisville Coach Jeff Walz. Now that the pressure is off, Russell can contemplate the future.

Russell’s stock started rising in the spring of 2011, and by the end of the summer, she was the nation’s top prospect. Each of the last two years, she has won gold medals with USA Basketball.

The speculation over where Russell would go to college these past few months has verged on the ridiculous – especially after she cut the list to the Vols and the Cardinals. The 17-year-old has received dozens of pitches on Twitter every day from fans wanting her to come to their school. She doesn’t respond; she simply retweets the message.

Hill said that though her daughter considered all options, her final decision didn’t surprise her.

“One day when she was in third grade, she told me she wanted to play for Tennessee someday,” Hill said. “I liked that idea.”

Russell will officially sign with Tennessee on Nov. 14, which is National Letter of Intent Day. 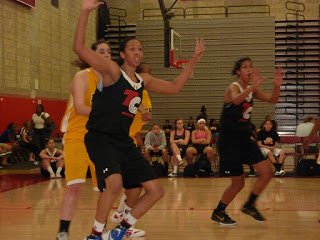 USA Basketball U18, U17 athlete profiles

Indiana Fever is back

And then there were Four