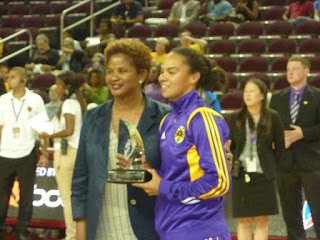 No surprise on Sparks guard Kristi Toliver’s most improved player award. She punctuated the honor by putting up 29 points last night in LA’s first-round win over San Antonio. She was presented the award prior to tipoff.

(For this voter, choosing Toliver for this honor was a no-brainer)

Quotes complied my me:

“Toliver is a workhouse. She’s working when people aren’t watching. She’s typically one of first ones in the gym. She really works on her game.”

“(Earlier in her career) she was her own worst enemy; opponents had very little to do with her because she was always beating her own self up. By giving herself a break she’s enjoying the game more, which has allowed her to really flourish and blossom.”

“Her mindset has created this outstanding basketball player, and I’m very happy that the people who voted on Most Improved Player were able to recognize how complete she’s become.”

“It was a no-brainer. She put herself in this season for sure as one of the top players in the league. I know from the last 3 years, watching her every day in practice, how good she was capable of being and how good she is. When I was sitting with our GM and we were talking about the future of the Sparks and we were talking about needing a duo, we wanted her. I’m just happy she’s on my team and I don’t have to play against her.”

Toliver on receiving the award:

“I’m honored to accept this award, and really what that award represents is hard work paying off. I’m constantly trying to get better, I want to be a great player. I know what it takes, it takes hours in the gym and in the classroom, and it didn’t just start this season. Earlier on in my career it was a struggle, but thru all these struggles, I’ve faced a lot of adversity, able to finally overcome and I’m proud of that and happy that I’m on my way to becoming one of the elite players in the league.”

Toliver on the difference Ross has made to her:

“Coach Ross wants playmakers on her team, and that’s something that I’ve always been. Our relationship started really well. She’s really open, and she’s going to tell you the truth whether like it or not, and I like that. She’s just a very candid, straight forward coach. She’s a great communicator and that’s something that I value, that I need, and she’s challenged me to be a great offensive and defensive player, to be a complete player, and I take everything she has to say to heart. I couldn’t ask for a better coach and I think I finally landed myself a great coach for me.”


Warning: A non-numeric value encountered in /home/womens07/public_html/wp-content/themes/Newspaper/includes/wp_booster/td_block.php on line 326

Days until the season: 28


Warning: count(): Parameter must be an array or an object that implements Countable in /home/womens07/public_html/wp-includes/class-wp-comment-query.php on line 405