Sun Coach Mike Thibault conducts a timeout – Photo by NBAE/Getty Images
As just about every WNBA team romped through a winning streak, struggled through a losing streak – or both – this year, team chemistry was called into question. And arguably, many of the teams with the best brand of that formula will be suited up for the playoffs later this week.

Team chemistry is a complex concept at best, unexplainable at worst, but increasingly definable. As they contemplated their post-season, which begins tomorrow, a group of league coaches and veteran players helped put the pieces of team chemistry together.

Traditionally, team chemistry has been thought to be the degree to which teammates like one another. But coaches and athletes said this is a mischaracterization. True team chemistry is a blend of structure, accountability, common goals, respect, trust, familiarity and growth. And it is the responsibility of both players and coaches.

“It starts with player selection, which begins with a coach considering, ‘can this player fit into the system?'” Hughes said. “Then there’s their role: is the role you’re going to put them in the one they see in their mind?”

Unity takes shape when athletes put the aims of the team before themselves.

“It takes like-minded individuals who want the same goal, and it’s not about points – it’s about being on the same page,” Lynx forward/center Taj McWilliams-Franklin said. “Each player gives up something because they are willing to succeed.”

“You sacrifice, or give more somewhere else,” Jackson said. “It’s about finding your roles and being able to work together and make something special happen.”

Sun Coach Mike Thibault’s philosophy stems from roles. Two years ago Connecticut drafted Tina Charles as part of building a new team. They did not qualify for the playoffs that year, but took the Eastern Conference title this season. Thibault said the process was a matter of giving players direction, and then letting them find their way.

“They needed to learn how to play together, and make mature playing decisions,” he said. “We coaches had to let them grow up. It wasn’t fun to watch them stumble and learn, but last year they got a lot better from that process, and playing together more.”

Part of that lesson was learning to embrace their roles. Thibault said when he made guard Renee Montgomery a bench player this year, everyone had to accept that it was best for the team.

“Now I’m harder on them and more demanding as they’ve been able to handle it,” he said.

“Good teams know that the stars are held just as accountable as the eleventh player,” she said. “Everyone has to be willing to do the dirty work, if necessary.”

“You have to develop and reinforce roles,” he said. “All roles are meaningful, though they are different.”

“You never reach total team chemistry until your best players are your hardest workers and your strongest leaders,” he said.

Respect over friendship, and longevity

Jackson said friendship between teammates is nice, but it’s not necessarily a pre-cursor to team success. Team chemistry is solely a group on-court relationship.

“Off the court you may be great friends as teammates, but it’s hard to find that line on the court,” Jackson said.

“Everyone’s got to have a maturity and selflessness when it comes to playing ball. You’ve got to have respect for each other, and be willing to work and develop together.”

Los Angeles Sparks Coach Carol Ross agreed that mutual respect between players is a must – even when they don’t get along or agree. That, she said, is the very root of team chemistry.

“It comes from respect,” Ross said. “You have to respect what gifts people have to bring. You’ve got to stick together when you don’t agree – you’ve got to be able to see another point of view.”

Hughes agreed that respect is essential to a successful team, and said it starts with the head coach.

“You create a culture as to how you work with your staff, how you treat players and how you expect them to treat each other,” Hughes said. “If that’s in order off the court, it follows on to the court.”

Ross said that building chemistry, trust and respect on a team “is the most important thing a coach does.”

Once the foundation has been established, athletes say it’s a matter of getting to know each other’s playing styles and building trust on the court. The longer teammates have been together, the better.

Liberty forward DeMya Walker, who helped the Sacramento Monarchs win a championship in 2005, said it’s impossible to have good team chemistry right away, when athletes don’t know one another. But the more athletes are around each other and play together, the better it gets.

“In Sacramento it took us a couple years to build team chemistry – to get to know each other’s tendencies,” Walker said. “But once you develop that chemistry, it breeds trust.”

“It’s that moment when you all feel the same way: ‘we’re in this together,'” she said.

Sutton-Brown points to the 2009 season, which culminated in the Fever playing for a championsip, as an example of perfectly-cooked team chemistry. It was one year where all athletes were back from overseas committments on the first day of training camp, and they developed connections early.

“We started right there, from day one,” Sutton-Brown said. “We knew each other’s playing styles, and off-court, we gelled together. I give credit to the Fever organization for keeping the nucleus of our team together for so long.”

Walker concurred that it’s easy to upset the apple cart.

“Every time you change a couple of pieces (players), it throws the chemistry off,” she said.

Though getting along outside of basketball is a plus, coaches and athletes said the best way to develop team chemistry is by playing together – a lot.

“People have asked me, ‘did you do team bonding during the Olympic break?’ and I say ‘yes, we call it practice,'” Ross said with a laugh. “While we practice, we’re always trying to build chemistry.”

Walker said there’s one way to know if your team has the necessary chemistry.

“You know you have it when you don’t have to think about it,” she said. “Everything just flows.”

Differences between women and men?

Studies – including one by this writer a decade ago – have shown that female athletes tend to be more concerned with the moods and feelings of their teammates and coaches than male athletes. So does this mean team chemistry is different for women? Maybe.

“Team chemistry is important for both women and men,” Hughes said. “Women see the whole picture more. They care about what roles others have and how I coach their teammates.”

Thibault said sometimes the women he has coached don’t want there to be conflict on the team, even though it’s inevitable.

“It’s healthy sometimes, and I tell them it’s OK to have conflict, but don’t take it personally,” Thibault said.

Jackson believes team chemistry is more important for women because they rely less on athleticism at times, and more on technical skills.

“When you have to do all the little things, you need a sense of solidarity,” she said.

“If you can’t get it together, it’s really frustrating,” Jackson said.

This year finds each on a team that has found enough unity to get to the post-season – particularly the Fever, who have been even stronger since resuming after the Olympic break.

Tomorrow round one begins with the Liberty at Connecticut and the Silver Stars at Los Angeles. Friday it’s the Dream at Indiana and the Storm at Minnesota. Though it’s only been since the weekend that the regular season  has been over for most teams, there is an urgency to get started with the playoffs. 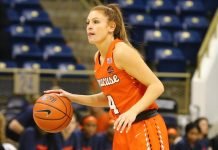 Some rocking and rolling in the scoring column