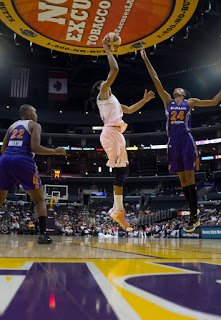 Candace Parker puts one up over DeWanna Bonner. Parker finished with 26 points, 11 rebounds, seven assists and four blocks. She shot for 11-18.

The Sparks never trailed in last night’s 101-76 win over the Mercury.

Mercury Coach Corey Gaines said after the game that Diana Taurasi, who didn’t make the trip with the team, will not play anymore games this season due to the same hip flexor injury she battled the first half of the season.

With the win, Los Angeles secures second place in the Western Conference, and home court advantage in the playoffs, which begin next week.

I’m really proud of this team for positioning themselves through a long season for protecting home court and securing it in the playoffs. The only team that came in here that slapped us was San Antonio. We’re very respectful of what they bring, and couldn’t be happier for the team.

On the Sparks 15-1 home record

Like I told the team before the game, this game isn’t about Phoenix. This is one game where we really shift our attention away from ourselves and our opponent, and it’s about representing the survivors. When you put on that pink uniform and those pink sneakers, it’s all about the people who have gone through breast cancer.

On playing in the playoffs…

On third quarter play for the Sparks

We’ve improved our third quarter performances. That was a thorn on our side all year long. Every time we would play a team and we’d have a nice lead at half, come out in the third quarter and disintegrate. I think in the last few games we remedied that problem.

On the third quarter play of the Mercury

We ran out of juice a little bit, and they kept on scoring. We hit a couple shots, and got some momentum going into it, but we just couldn’t stop their momentum. I could only play three starters per quarter, and had to play subs, and we kind of dropped off a little bit.

On the play in the third quarter

We made a couple turnovers. They were bad turnovers in transition, which led to their easy buckets. When you’re trying to come back on a team, you can’t afford turnovers.

Big Monday: herstory is made

Want better high school coaches? Here’s why you may not be...